A small number of 350 and 400 cubic inch displacement V-8 engines were built before 9/24/73 (0924) with a coolant blockage in the cylinder head resulting in an overheat condition.  A 1974 casting process change has resulted in a possible blockage of the coolant exit port in cylinder head casting No. 333882 (casting number appears on the top of the cylinder head beneath the rocker cover).  This cylinder head is common to all 1974 small block V-8 engines, except for those used in C-K30 and 50 thru 60 series trucks.

As of 10/1/73, at all assembly plants, engine assemblies that were built before 9/24/73 and were not installed in vehicles have been inspected for the blockage and identified by a white, circular (1" dia.), paint mark appearing on the front of the engine block below the date stamp, or on the inlet manifold near the thermostat housing.

A blocked coolant passage should show up in the first five (5) to ten (10) minutes of engine operation, and it is recommended new units be run for that period during new car preparation.  If an engine overheat condition is encountered, the following probe inspection should be made to determine if the coolant passage is blocked.

NOTE:  As of 10/1/73, all General Motors Parts Division locations have inspected their stock of 1974 350 and 400 C.I.D. service engine assemblies and cylinder head assemblies for the blocked coolant port.  Service cylinder head assemblies, No. 6260856 and No. 6260858, received by dealerships before 10/1/73 should be inspected for the blockage before they are used.  Refer to the illustration to determine the location of the possible coolant port blockage. 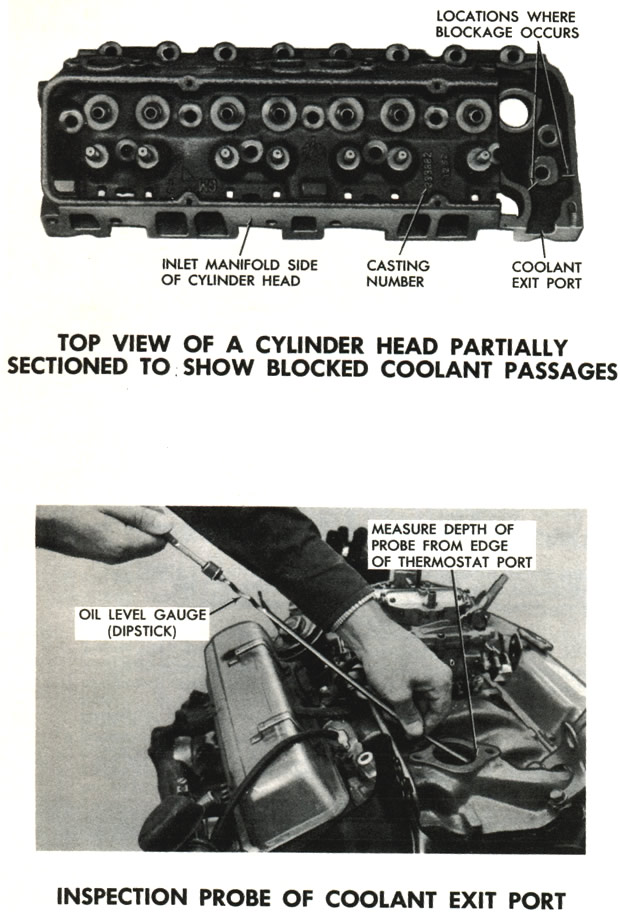 1974 inlet manifold side gasket usage has been changed for 350 and 400 cubic inch displacement V-8 engines with a four (4) barrel carburetor.  Gaskets with a restricted crossover port are used on both the right hand and left hand side of the inlet manifold.  350 and 400 cubic inch displacement engines with a two (2) barrel carburetor still use a restricted gasket for the right hand application and an open gasket for the left hand.  the correct inlet manifold side gaskets can be obtained in the following gasket units.