Reports have been received of 1968 vehicles with air conditioning failing to cool properly due to a low refrigerant charge.  A leak check on these units usually shows a good system, however, when a unit is recharged it may be returned later with the same complaint.  This type of discharge or leakage has been traced to the compressor suction-discharge fitting O-rings leaking when subjected to low temperatures, particularly as during the winter months, but leakage can occur at temperatures of 60°F or less.

In production, the suspected seals were used between September 1, 1967 and March 18, 1968 and again between April 22, 1968 and April 29, 1968.  Compressors built within these dates may be identified by noting the date stamped on the identification tag (See Fig. 1) located on top of the compressor.

For service, when a refrigerant leak is suspected but cannot be detected on compressors built within the above dates, the compressor suction and discharge seals located at the rear connector block of the compressor should be changed using the following procedure:

NOTE:  In addition and in order to prevent possible inconvenience to customers, it is suggested that all 1968 air conditioned vehicles that come in for service be checked to see if the compressor build date is within the above specified dates.  On those vehicles with compressors within these dates view the state of charge in the sight glass and repair as necessary any that indicate low charge.

PROCEDURE FOR INSTALLATION OF O-RING SEALS

1.  Discharge the system and remove the connector block from the rear of the compressor.

Note:  All new O-ring packages will be date stamped as of May 1, 1968.  Any other O-ring should not be used.  O-rings should be dipped in clean Frigidaire 525 viscosity refrigerant oil and immediately placed in suction-discharge port cavities.  Do not drain or wipe excess oil from O-ring.

4.  Add a dab of white paint after the shift digit on identification tag. 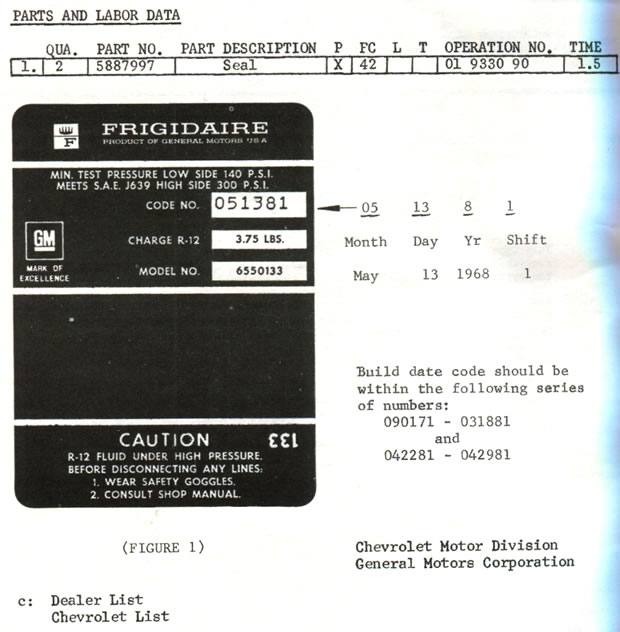