Unexplainable failures of transistorized voltage regulator, Part No. 1116368, may be encountered on 1965 models so equipped.  Failures are most generally indicated by no Delcotron output (trigger transistor damaged); however, in isolated instances, it may be no regulation and excessive output voltage due to failure of output transistor.

Failures of this type can result from high voltage discharge when blower motor, air conditioner compressor clutch, ignition coil, etc., are turned off with the ignition switch.  Failures will be more prevalent on vehicles equipped with an ammeter as opposed to the telltale light as the telltale light circuit does contain a resistance which retards reverse current flow.

As an interim 1965 production change, an externally mounted diode is being added to shut these reverse currents to ground.

When a field failure is encountered, replace the regulator and install a suppression diode as outlined on the following pages of this bulletin.

If a transistorized regulator failure is encountered on an early 1965 unit without apparent cause, the problem may be the result of excessive reverse voltage surges generated by heater or air conditioning blower motor, power window motors, etc. when the ignition switch is moved to the "off" position.  To provide a ground path for such transient voltages when installing the replacement regulator, install a suppression diode as outlined below.

3.  Remove the brown wire from the #4 location in the plug by using a small thin bladed tool to release the lock tang.

4.  Obtain a Part #2988198 wire and diode assembly, and insert the spade terminal from the short blue wire into the #4 location in the regulator plug.

5.  Reform the lock tang on the spade terminal of the brown wire (previously removed from the #4 position) and install a Part No. 2977253 connector body over the terminal.  Plug this connector into the receptacle of the wire and diode assembly. 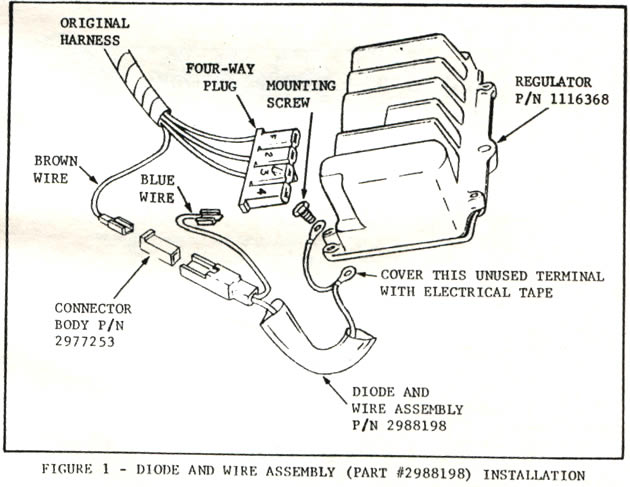 6.  Install the regulator with the black ground "pig tail" attached by one of the mounting bolts (see fig. 1).

8.  Reinstall the regulator plug and the battery ground cable.