Some 1978 Corvettes as of March 1, 1978, are being equipped with a tamper resistant choke design to discourage readjustments of the choke cover-coil assembly.  Corvettes involved are those equipped with the Federal 350 engine and air conditioning and automatic transmission.  The carburetor with the tamper resistant choke design is P/N 17058206; this replaces carburetor P/N 17068204.

Instead of using a scribe mark for choke cover indexing, a special cut-out is machined with the choke cover at the three o’clock position, which matches a tab on one new cover retaining clip.  The three choke attaching screws have been replaced with pop-rivets.

NOTE:  The choke thermostatic cover should not be removed except during major carburetor overhaul or during replacement of cover and coil or choke housing.

1.  Carefully align a #21 drill (.159") on rivet head and drill only enough to remove rivet head.  Drill the two remaining rivet heads and then use a drift and a small hammer to drive the remainder of the rivets through the choke housing.

CAUTION:  Exercise care in drilling to prevent damage to choke cover or housing.

1.  Start the three self-tapping screws in the choke housing, checking to make sure that screws start easily and are aligned properly, then remove screws.

NOTE:  The self-tapping screws are supplied with service kits.

4.  Install retainer with tab at location A and align notch in cover with tab on retainers.  Install one self-tapping screw. 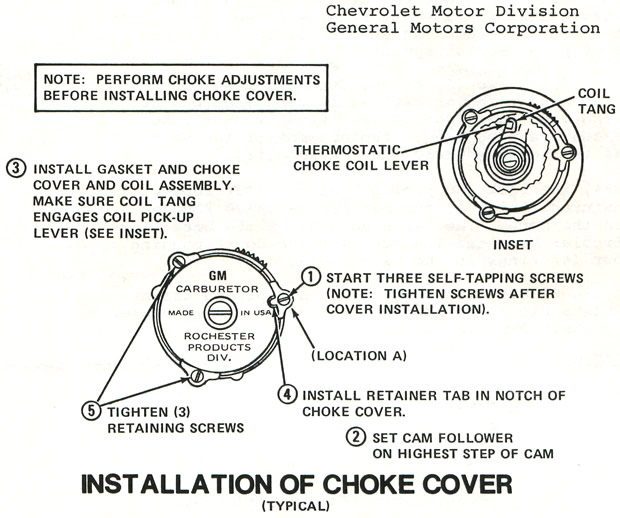