As stated in an article entitled "Anti-Reversing Odometers - 1969 Vehicles", which appeared in the February, 1969 issue of Chevrolet Service News, the anti-reversing odometers will ordinarily being to accumulate mileage after forward motion of 0.2 mile or less.  Under some conditions, however, additional forward motion will be required and therefore, an odometer should not be considered non-functional until a minimum of five (5.0) miles has been covered in a forward direction.

What was not stated in this article was the fact that if a vehicle equipped with the anti-reversing odometer is driven in revers or operated on test equipment in reverse for a distance of one-quarter (1/4) of a mile or more, the special cam and gear assembly between the odometer drive wheel and the decimal wheel will disengage and the odometer will cease to function.  In order to restore operation, then, the vehicle must be driven in a forward direction for a distance of up to five (5.0) miles.

In addition to incorporating the anti-reversing feature, odometers used on vehicles built after January 1, 1969 also incorporate a telltale feature to provide visual evidence of any attempt to forcibly reset the mileage.  If the first or second figure wheels of the pinion carriers are forced to rotate in an attempt to change the mileage reading, a white portion of these pinion carriers is exposed as shown in Figure 40.  This color change from black to white occurs due to the fact that forcing the odometer wheels or pinion carriers will break a plastic ’carrier breakaway strip’, which holds the carriers in alignment.  Breaking this strip allows the first and second carriers to rotate, exposing the white surface. 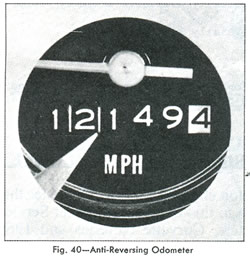