Several types of shift problems may be encountered on early Production 1962 Passenger Cars and Chevy II Models equipped with the aluminum Powerglide transmission.  The various problems and possible causes are in addition to those provided in the Shop Manual.

DELAYED OR NO UPSHIFT

The most common cause of delayed or no upshift is foreign material in the transmission becoming lodged in the valve body or governor in such a manner that a portion of the governor pressure is lost, thus delaying or preventing the upshift.

On early 327 engine equipped models, delayed upshift may be due to installation of an incorrect throttle valve (TV) linkage.  In a few instances, the 283 engine cross shaft was installed instead of the correct TV cross shaft, 3817860.  The TV cross shaft are easily identified as the 283 version has a bend in its outboard lever whereas the 327 cross-shaft lever is straight in this same area.  (Figure 1).  If the TV cross shaft was incorrect, also check the cross shaft-to-TV lever rod.  As shown in Figure 1, this rod, 3790776, is formed on 327 engine applications as compared to the straight rod used on 283 engine versions.

When checking complaints of RPM flare at the shift, first check the dipstick installed in the vehicle as the "Full" mark on early production dipsticks is approximately 1/2" lower than the "F" mark on the present dipstick (Figure 2).  The later dipstick entered Production approximately September 4, 1961.

The early style dipstick is easily identified as its bottom section is absolutely flat whereas the later dipstick has a formed bridge just above the oil level markings to keep it centered in the filler tube. (Figure 2).  A further check is to measure the distance from the top of the cap to the "Full" mark; on Passenger and Chevy II dipsticks, this distance is now 22-1/2", as compared to 23" on the earlier dipsticks.  This distance on the Corvette dipstick is now 24-1/2" as compared to 25" on earlier units. 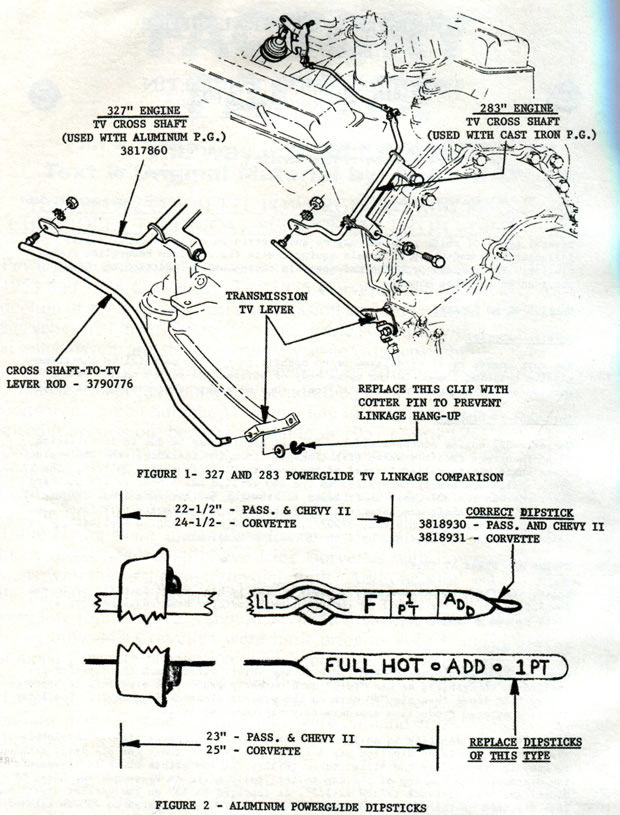 Replace all early dipsticks with the later part when found and add oil as required to raise the transmission oil level to the "F" mark.  The later dipstick for 327 engine passenger cars and all Chevy II Models is 3818930; for Corvette, 3818931.

Engine RPM flare may also be encountered if the vacuum modulator valve has stuck in the minimum pressure position and would most likely be caused by foreign material in the oil causing valve hang-up.

A check for correct low band adjustment should be made if engine RPM flare occurs at the upshift or during forced downshifts.