Changes have recently been made in the 1953 Powerglide transmission valve body assembly to eliminate a metallic rapping noise which occurs on some early transmissions immediately after starting the engine.  This noise is caused by the pressure regulator valve pulsating back and forth and will continue, if the shift lever is left in neutral position, until the converter fills with oil.  The condition is not detrimental to the operation of the transmission and in some cases will hardly be noticed or will be of short duration.

Shortly after the start of 1953 production, a change was made to incorporate a two-piece pressure regulator valve in the valve body assembly.  The new valve provides an internal plunger which serves to dampen and oil cushion the assembly preventing excessive pulsation.  Transmission with the suffix "M27D: added to the serial number will have valve body assemblies with the two-piece pressure regulator valve.

The new pressure regulator valve differs in operation from the valve described in the Powerglide Manual in the following manner.

The internal plunger will remain in the position show in Figure 1. 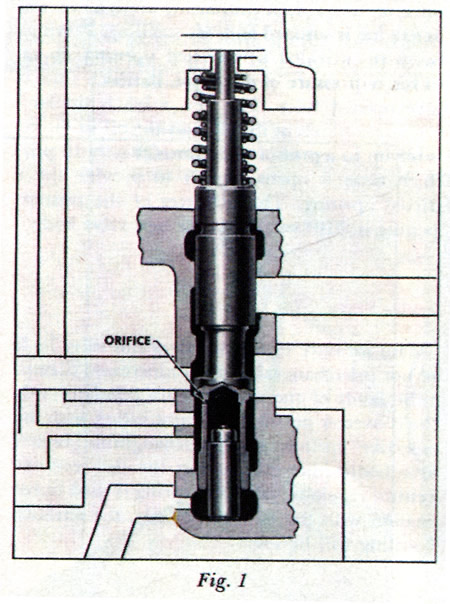 Cleanliness and care are all important when working on the low and drive valve body.  The parts in this unit are held to extremely close tolerances and the lands on the valves and in the valve body are purposely machined sharp to prevent dirt getting under or wedging between the valve and valve body.  Under no circumstances should crocus clot or emery cloth be used to polish or round off these sharp edges.  In instances where there are small nicks or burrs on the lands of the valves, a fine stone may be used if it is held flat on the end of the land or on the land while the valve is turned.  Care should be exercised so as not to create or form flat sports on the valve land.

When assembling the low and drive valve body, the throttle valve control outer lever assembly should be placed on the inner lever shaft so that the long part of outer lever clamp is toward the outside.  This places the head of the clamp-to-lever attaching bolt to the outside and keeps the edges of the splines machined in the clamp from contacting the seal.  The correct position can easily be seen in Figure 149 of the 1950-53 Powerglide Repair Manual.

The following 1953 Powerglide parts have recently been released for service:

The proper fit of the piston is gauged by the pull required to remove a .0015" feeler ribbon placed between the piston and cylinder wall.  This provides an accurate and uniform means for piston fitting, however, certain precautions must be observed.  The piston and cylinder wall must be perfectly clean, smooth and dry; ridges, rough spots or other irregularities must be removed as they would provide false scale readings.  The piston rings should be removed.  The piston pin should be left in for ease of handling.  Ideal temperature for piston fit will approximate room temperature of 70 o F.

The lower ends of the feeler ribbon should be rounded and any frayed edges honed to prevent possible scratching of the piston and cylinder wall and incorrect scale readings.  Feeler ribbons that are rusted or wrinkled are unfit for use. 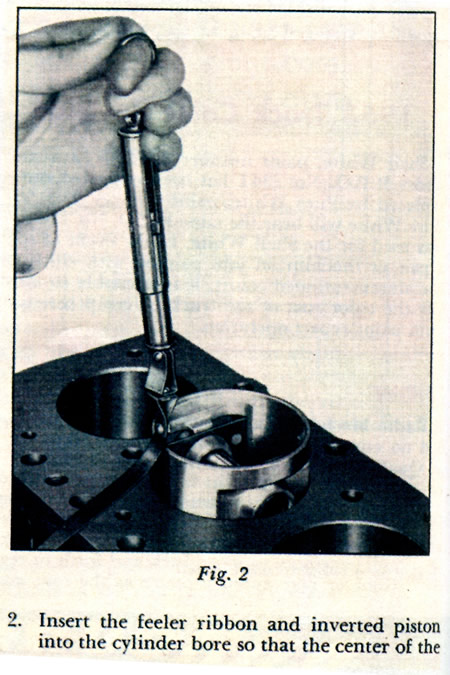