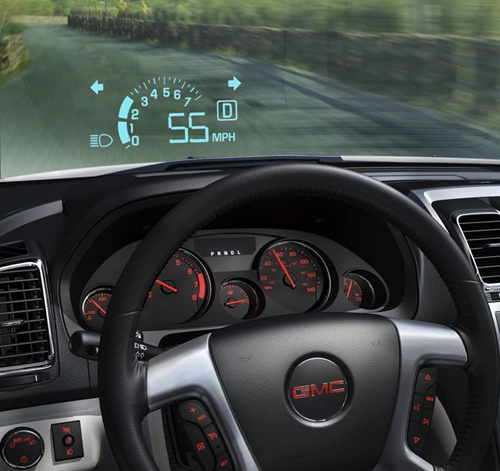 Fig. 9
If the HUD image on the windshield is not clear or parts of the display do not illuminate properly, review the following service tips.
Ghost Image
The HUD image may not appear clearly. If inspected closely, there appears to be two similar images; this is often described as a "ghost" image. This condition may be more noticeable during low ambient light conditions -- early morning or evening -- or when a dark object is present in front of the vehicle in the viewing area of the HUD.
The HUD image is projected on the surface of the windshield glass. Since a windshield is composed of two thicknesses of glass, there are two reflections. In order to align these two images, a wedged shape plastic laminate is used between the two layers of glass. If the dimensions of the plastic laminate are not correct, the images will not fully align and the HUD image will not appear clearly.
In order to diagnose this condition, apply petroleum jelly to the outside of the windshield in the area of the HUD display. If there is no longer a "ghost" image, the condition can be attributed to the windshield.
The extent of the "ghosting" can be helpful in determining if the vehicle has the proper windshield. If the "ghosting" offset is greater than 25% of the width of a line/bar of a HUD character, the vehicle likely does not have a HUD windshield. If the offset is less, or if it’s determined the vehicle has a HUD windshield, another windshield can be installed that may have less distortion/variance.
Use of a non-OEM HUD windshield may result in this condition. HUD windshield identification should be found in the lower right corner of the windshield.
Intermittent Illumination
All segments of the HUD illuminate intermittently. Under certain ambient lighting conditions, it may appear that all of the various segments within the HUD are on. Typically, further questioning of the customer will reveal a correlation between the time of day and what direction the vehicle is traveling in relation to the sun. This is a normal condition if the sun is shining at a certain angle directly into the HUD display.
Hazy Image
On a new vehicle, the HUD image may be poor or hazy. New instrument panel pads may emit fumes that cause a film to form on the HUD lens. Regular household cleaners will not remove this type of film. Isopropyl rubbing alcohol should be used to clean the lens.
- Thanks to Randy Miller