An undetermined number of 1968 Corvette convertibles were built with the ground and battery feed wires reversed at the rear courtesy lamp connector.  The correct wiring at the courtesy lamp harness connector is shown in Figure 9.  The white wire is the ground circuit which is completed through the door jam switch and the orange wire is the battery feed circuit.  Reversing these two wires makes the bulb case the battery feed (hot) side of the circuit rather than the base of the bulb and accidentally touching the case to the retaining bracket (during service or through corrosion build-up) will create a short circuit that will blow the "clock-lighter-courtesy light" fuse. (20 Amp.)

Consequently, if a 1968 Corvette is brought in with a complaint of an inoperative courtesy light, check the bulb; if the bulb is OK, check the fuse.  If the fuse is blown, remove it but do not replace it until you have checked to see if the courtesy lamp is properly wired and/or if corrosion has built up within the socket.  To check the wiring, perform the following:

2.  Pull carpeting from front of wheel housing until wiring is exposed.

If the wiring is not reversed and the fuse was blown, check for an electrical short at some point in the harness or a corroded condition between the bulb terminals in the bulb socket.

Once the proper correction has been made, re-install trim and replace fuse.

As mentioned the orange wire is the feed or hot wire.  Bulb operation is accomplished by completing the circuit to ground (white wire) via the door jamb switch.  Consequently, if the courtesy lamp comes on intermittently or stays on all the time and the door jamb switch is not defective, there exists a path to ground condition in the circuit beyond the door jamb switch.  in almost every instance this path is formed by a corrosion build up at the bulb’s socket base.  Since the bulb support is connected directly to the hinge assembly, a path formed (through corrosion build up) across the bulb socket and bulb support completes the ground circuit and makes the bulb operative independent of the door jamb switch.  To correct this condition, the corrosion should be cleaned off.  To avoid re-occurrence of the problem, the support can be isolated from the hinge assembly by mounting it in a rubber fastener (same as used for voltage regulator mounting) with a new bolt as shown in View B of Figure 9. 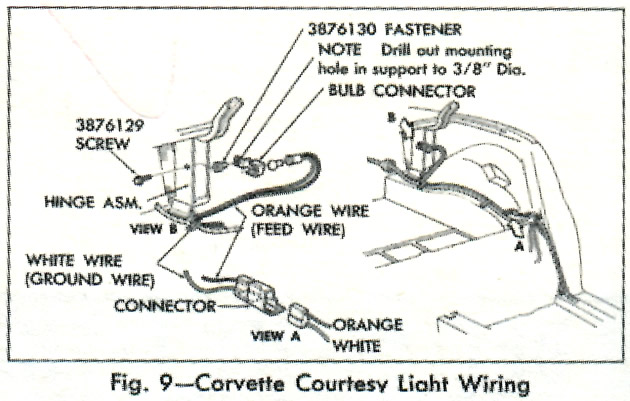