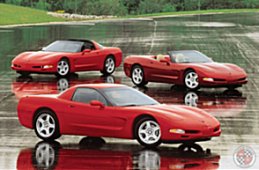 Not a Lightweight at All:  New Composite from GM Is Stiff Enough for Structure, Resistant to Heat

With a projected annual unit sales volume of less than 4,000, the 1999 model C5 Corvette Hardtop has yet to become a big money-maker for General Motors(GM).  But with a starting price of $39,475, the new fifth-generation hardtop -- the first fixed-roof coupe since the second generation Stingray of the '60s -- is the least expensive and lightest of all three current 'vette body styles.  Elimination of the hardware associated with the convertible and removable roof (targa) models contributes to the reduced mass of the vehicle, as does the lightweight design of the roof itself.

The primary challenge faced by the Plastics Division of The Budd Co. (Troy, Mich.), which designed and fabricated the assembly, was in meeting the tight tolerances established for the fixed roof of this luxury sports car.  A combination of lightweight SMC materials was chosen because each of those materials could be molded to precise tolerance and maintain dimensional stability over time.

The roof assembly, which measures 55 inches long by 58 inches wide, consists of an outer panel molded of conventional SMC, to which are bonded four inner reinforcing panels of low-density SMC (LDSMC).  The outer roof has a nominal thickness of .07 inches; the inner panels are .066 inches thick.  Total SMC content weighs 23 lbs.

"The dimensional accuracy requirement of a part like this is very exacting, because the roof has to drop into an opening that already exists, achieve consistent gaps and flushness, and be waterproof, as well," observes Roger Johnson, GM performance car body systems engineer.  The roof's configuration also determines the door openings and gaps to the panels with which it mates.  "Anytime a system designed like this is used, the last part in is the one in which dimensional accuracy is so important," he adds.

The Budd Co. worked closely with the OEM to get the roof's tolerances within an acceptable range for the build of the vehicle, according to Scott Bufe', The Budd Co.'s advanced program manager for GM.  "This was a challenging job that required a lot of fine-tuning and numerous iterations, but it paid off.  We were able to meet GM's objective of improving the tolerance over what was already being achieved on the convertible and the targa," he remarks.

Mass reduction is an important imperative for a high-performance vehicle such as the Corvette, says Bufe'.  "As GM has added more comfort, safety and performance features, it has needed ways to offset the additional mass inherent with these new features.  Use of low-density material is a step in that direction."  Using LDSMC in the roof assembly saves about six lbs over the cost of molding the part completely from conventional SMC, says Randy Lambert, technical services manager at Budd's Carey, Ohio molding plant.  With a specific gravity of 1.3 to 1.4 g/cc, LDSMC is almost one-third lighter than conventional SMC, which has a specific gravity of 1.8 to 1.9 g/cc.

Mass reduction in the formulation, which GM developed and calls Dbl Lite SMC, comes from the use of hollow glass microspheres (density 0.37 g/cc or lower) to replace most of the calcium-carbonate (density 2.7 g/cc) filler in standard-density SMC.  Outside suppliers produce LDSMC to GM's specifications.  "The magic density target for SMC has been 1.3," says Ken Rusch, Budd's technical programs manager.  At 1.2, we can match the weight of aluminum, which is about half the weight of steel, for body panels.  The low-density materials that we had a few years ago took the density from 1.9 to 1.6; now we're at 1.3 and we'll probably take it even lower.'

There is a cost penalty for using low-density rather than standard-density SMC, since hollow glass microspheres are more expensive than calcium carbonate, which is viewed as the "Cheapest possible material" to use as filler, according to Rusch.  "SMC is highly filled with calcium carbonate.  But in addition to reduced cost, it also enhances the surface.  When you start replacing calcium carbonate with other fillers, you tend to lose surface quality."  Since the glass microspheres rupture when sanded, creating a porous surface, the material has not been used for exterior panels that require a smooth, Class A surface.  Rather, it has been used successfully for inner reinforcing panels on the Corvette's doors, hood, deck lid, tonneau cover and now, on the roof of the C5 Corvette.

The next advance for LDSMC will be the development of surface sealers or coatings that permit the material to be used for Class A applications, notes Rusch.  "The sealer has to be something like a temperature 2K urethane that would set up and seal the pores at low enough temperatures without outgassing.  Once the sealer has achieved a very tight crosslinked density on the surface, you can paint it and put it through a high-temperature oven."  He notes that several LDSMC sealer systems are being tested and expects the material to be in production for Class A surfaces for the 203 model year.

To reduce the cost of LDSMC for the C5 program, GM switched from a vinyl ester resin to a polyester system from Ashland Chemical Co. (Columbus, Ohio).  Polyester costs about 30 cents/lbs. less than vinyl ester, reports Dick Holmes, GM materials engineer.  He figures the weight savings of using LDSMC -- with roughly 0 percent glass content for the C5 Corvette -- is about 30 percent compared to molding the roof completely from conventional SMC.

Budd molds the conventional SMC panel on a 3,000-ton stamping press than was retrofitted for compression-molding.  The hydraulic valving, pumps and controls package were upgraded to make the press suitable for molding Class A surfaces.  Closure speeds were optimized to achieve a porosity-free surface.  In addition, a proprietary vacuum system is used to enhance the flow of SMC and reduce surface defects.  A vacuum is pulled during mold closure and initial tonnage build, evacuating the mold chamber of trapped air and gases. 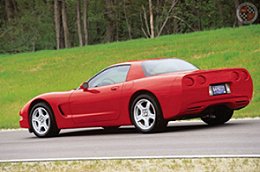 The mold weighs about 700,000 lbs and was designed without ejector pins to avoid the risk of marring the surface of the relatively thick outer roof panel.  An air blow-off system is integrated into the male half of the mold to break the panel out of the tool.  Budd molds the part at 1500 psi at 310oF.  The molds for both the outer and inner panels were manufactured of P20 steel by Autodie International (Grand Rapids, Mich.), working closely with Budd technicians, who qualified the molds for manufacturability.

The standard-density material for the outer panel is compounded from polyester resin supplied by Alpha/Owens Corning (Collierville, Tenn.), loaded with 27.5 percent glass fiber fromOwenss Corning (Toledo, Ohio).  To fabricate the deep, fairly complex roof panel, an eight-piece geometric charge pattern was developed using the Design of Experiments (DOE) process.  DOE is a statistical tool that applies geometric principles to statistical sampling to reduce the number of test trials and increase product and processpredictabilityy.

The SMC plies are automatically cut to size on a programmable slitter and loaded manually into the mold at the prescribed locations.  "Part geometry determines how wide and long a particular area of the charge pattern should be to minimize knit lines and flow lines," Lambert explains.  Part output is 160 pieces per eight-hour shift, about one panel every three minutes.  After the panel is removed from the tool, it is allowed to cool for several cycles before the parting line is manually deflashed with fine-grit sandpaper.  For quality control, a highlighter dye is wiped over the Class A surface of the panel to help reveal surface imperfections during visual inspection.

Two additional molds are used [to] produce the four inner panels.  A multicavity mold weighing about 15,000 lbs. is used to simultaneously fabricate the front reinforcement panel and the two side brackets.  The rear panel mold weighs about 20,000 lbs.  Both molds have internal injector pins.  To fabricate the inner panels, 650- and 750-ton Williams-White compression-molding presses are used. 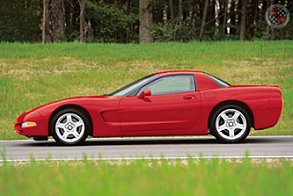 The rear inner panel, the largest of the four reinforcing panels, measures 28 inches long by 58 inches wide.&nbsp. The forward panel measures 27 inches long by 46 inches wide.  Two, 14-inch-long side reinforcements provide additional support over the window glass areas to help achieve structural rigidity.  Budd does not use its vacuum system to mold the inner panels, which arfabricateded atheeh rate of about 120 sets per shift, or one set every four minutes.  The charge pattern for the rear panel incorporates five layers of LDSMC.  The front panel and side brackets require six pieces of material to mold the three parts.

The side brackets are bonded and "pop-riveted" into the front inner panel to ad support.  The entire assembly, including the rear inner panel, is then bonded as one piece to the outeroofof with a two-component epoxy from Lord Corp. (Cary, N.C.).  Budd technicians used the DOE approach to optimize the application of epoxy to the bond joints.  The bond flanges are .72-inch wide.   Adhesive is applied in a .56 inch-wide strip along the flanges at 1.25 mil thick, +/- 0.25 mil.  DOE also determined the optimum bond-fixture temperature to minimize shrinkage of the LDSMC parts.  D-Sight results prompted a change from steam-heateded bond fixture to hot-water heat at 200oF.

After bonding, the completed roof assembly is inspected for defects that may have occurred during handling, then roboticaly primed with a conductive primer and baked at 210oF. After a final inspection, the assembly is shipped to GM's Bowling Green, KY., assembly plant, where the Corvette is built. The roof is topcoated, then bonded to the mating surfaces of the other body panels with a combination of butyl and urethane adhesives.

Final topcoating is applied via a panels-off approach for the entire vehicle:  all the body panels, including the roof, are painted before they are attached to the car (toward the end of the assembly process) tominimize exposure of the panels to scratches and other damage that can occur during the build.  In contrast, the original fixed-roof coupe, was painted after the body was completely assembled.  The elimination of special handling or assembly is critically imporant today in qualifying a material for automotive body applications.

Before leaving the plant, every car is tested for water leaks and must meet GM weatherproofing standards.  During the prototype build of the fixed-roof model, water-leakage issues came up and prompted some design changes.  These included revising bond-joint patterns to eliminate channels that acted like gutters along the roof where water could migrate into the car.  Ribbing was added to the front and rear reinforacing panels to contain high-density heat-expandable foam.  The ribs keep the foam from flowing out during processing.  The foam, applied manually into selected area of the part, expands while in the primer oven to form dams, preventing the channeling effect.

"Body panel quality is very critical for Corvette, in terms of both dimensional stability and surface," says Budd's Lambert.  "When buying an expensive sports car, the owner wants a vehicle that doesn't leak and looks great."