GM designer may appear in ‘Transformers: Age of Extinction’ 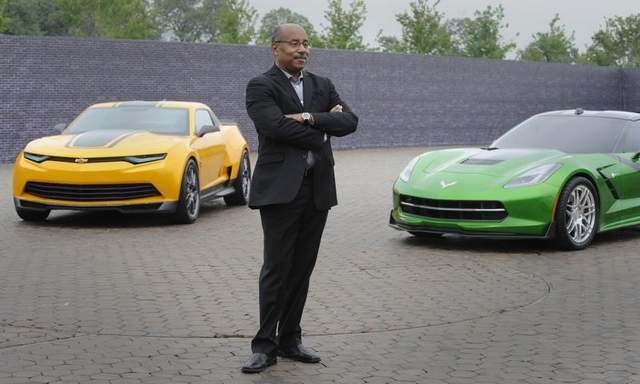 Warren, MI —In the upcoming action-blockbuster “Transformers: Age of Extinction,” expect to see a bolder, stronger and more dramatic Chevrolet Camaro that transforms into the plucky Autobot named Bumblebee — as well as a Corvette Stingray, Chevy Sonic Rally Car and Chevy Trax.

You might even see GM’s top designer, Ed Welburn, who filmed a speaking part for the Michael Bay movie that hits theaters June 27.

In a film clip shown to media on Thursday, the generally calm Welburn, appearing to be angry, points to the film’s star Mark Wahlberg and speaks the lines, “My office in 15 minutes. I think you know where that is.”

Welburn, who is GM’s vice president of global design, said he spent a day filming the scene in GM’s Design Dome, and it took a few takes for him to “get angry.” He said he was worried it would end up on the cutting-room floor, but the last he heard, it’s still in the movie. He wasn’t able to divulge what the scene is about.

EDITORIAL: GM Needs to Communicate with its Dealers!

Last Day To Enter For Chance To...