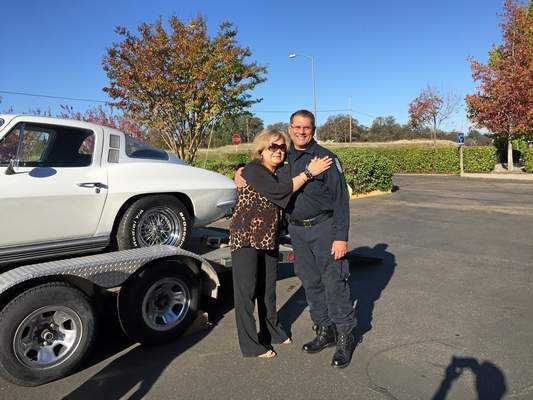 It turned out to be a special Thanksgiving holiday for one Arizona woman who received a call from a California Highway Patrolman regarding her 1964 Corvette that was stolen 40 years ago.

California Highway Patrol Officer Dave Madrigal reunited Modesto Fleming of Arizona with her 1964 Corvette that was stolen just over 40 years ago approximately 500 miles from where it was found.

The owner who had the car in Red Bluff, California, recently had it at a car show, when someone looked at the VIN and told the owner it was a VIN for a different Chevrolet model and that he should take it to law enforcement to have it investigated.

On October 20, the owner took the Corvette to his local CHP office, and Officer Dave Madrigal was assigned with investigating the VIN which turned out to be for a 1964 Chevrolet Impala.  Madrigal was able to locate a different identification number on the Corvette, at which point he contacted the National Insurance Crime Bureau for clarification.

“The number returned to a 1964 Chevy Corvette that was an unrecovered stolen vehicle out of Anaheim Police Department in September of 1976,” Madrigal said. “I contacted Anaheim and advised them of the situation. They researched their micro fish for the stolen report and called me back. They then located the victim from 1976, who is currently living in Arizona, and told her we had her car.”

Officer Madrigal questioned the current owner and learned that his wife bought the car for him in 1987 from a dealer in Redding, California which since had gone out of business.

On November 4th, Modesto Fleming arrived in California and was given the Corvette back.

Congratulations to her getting her 1964 Corvette and a job well done to Officer Dave Madrigal and the California Highway Patrol!!

0
0   0
previous [VIDEO] A 1982 Corvette Finds a Special Home in Iceland
next If You Think You're Too Young to Afford a New Corvette? Think Again!

Man Reunited with his 1954 Corvette 30 Years After Selling It