More security? Yes, but that also means more workers dealing with fewer passengers. And I do not mind having to remove my shoes, get patted down or have to show my picture ID a few times. It actually made me feel a lot more comfortable. Besides, I like the looks of the camouflaged soldiers carrier M16 rifles. Glad they are there and I appreciate their duty.

So getting to Daytona could not have been much easier. Daytona International lies immediately adjacent to the racetrack. The terminal is small with quick walks and to baggage claim and rental car stands. Then a very quick run (about 10 blocks) to Grand Am registration to pick up credentials. No line, and plenty of friendly faces and a painless transaction.

I always get excited when I drive through the turn 4 tunnel at Daytona. You dive under the track in a very dark and confining space, and emerge on the massive infield surrounded by high banking, and oceans of sports cars, race transporters, garages, vendors and people.

The event has the buzz of a rock concert, the food and vendors from a state fair, enough cars to look like a cruise-in or concours, and all of this is just the backdrop for 24-hours of hard racing.

Friday was spent getting the lay of the land, and scoping out the best gates to use in and out of the garage areas and pits. Since the infield will be home for the next few days, it is not a bad idea to figure out where all of the concessions and restrooms are.

Time for the last practice for the race. This session is extremely important and saw just about every team out on the track. "Qualifying trim" on a racecar means a light fuel load, fresh tires, and as little aerodynamic drag as possible to maximize the straights. But "race trim" is all about reliability, driveability, and durability. These are the keys to winning and finishing.

After practice and a brief walk through the garages and vendor areas is off to the hotel.

There is absolutely no shortage of places to stay, and places to eat in Daytona Beach and getting rooms is also pretty easy for this event. For the Daytona 500, they jack up the prices and have mandatory minimum night stays, but for the Rolex, you can take your pick and pay right off of the rate card.

After a great dinner at the Ormond Steakhouse in Ormond Beach (just north of Daytona), and a quick stop at Publix for race-day supplies, it was time for some sleep.

The anticipation of the start of the race builds from the moment you arrive at the track on Saturday morning. Overnight an entire tent village has filled the infield between turns 3 and 4, and motorhomes have packed turns 1 and 2. Cars stream into the facility, and every fifth car is a Corvette, Porsche, BMW, Jaguar, or Ferrari.

Every square inch of infield that can be parked on, is parked on! The choice locations obviously are up close to the track, but if you stay at your vehicle for the whole race, you really miss out on some great access and viewing.

The air is filled with wood smoke from campfires, a variety of food smells, music from car stereos, and the occasional track announcement blasting over the PA.

Late morning we were treated to some high-speed parade laps of some vintage racecars, including some very nicely restored Corvettes. A total of five participated. Three 1963 cars, and two 1973 cars. At least one of the 1963 bodied cars had a 427 stuffed in it. There was no mistaking that 7 liters of rumbling thunder! These car were probably campaigned for five to 10 years in various series before getting mothballed, and eventually restored, but they were absolutely impeccable restorations.

The morning flew by and the cars were already gridding on the pit lane. As we walked up and down the pit lane, the excitement just kept building. The cars were gleaming with recent waxing and cleaning, and were surrounded by crew members doing last-minute tire pressure checks and putting clear helicopter tape on the seams of the body work.

It is also very obvious that this event is very international. Exotic accents, international flags, unfamiliar sponsor names and unique clothing clue you in that the world is here.

The drivers pose with their cars. CEOs and sponsors are escorted around like celebrities. Then over the track PA, "Ladies and gentlemen. It is time to clear the grid. Ten minutes to the start of the 40th running of the Rolex 24 Hours of Daytona!"

Country singer and bombshell Sara Evans belts the national anthem to the cheers of the crowd, awards and presentations are made. And then the moment that will set the machines into motion.

Formula One and Sports Car legend Phil Hill takes the podium. He is the grand marshall. After a few remarks he speaks the words that we have waited all winter to hear: 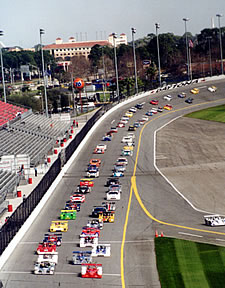 The roar starts to rise from V6, V8, V10 and V12 engines. Ground pounding, organ-shaking thunder. The drivers blip their throttles to keep from fouling plugs, and the track announcer is silenced. The crews back away from the cars for the last time, and the field of 74 cars roll off on two formation laps.

As they bunch up and the pace car pulls off from NASCAR turn four, the green flag waves, and the entire field accelerates in side-by-side, rows of two. Now they scatter from formation and the racing begins.

The opening laps are so fast and furious because they are bunched up, and because no one has dropped out yet. It is crowded, and it is fast. A lap for the leader only takes about 1 minute and 40 seconds, and from the grandstand you can see every turn of the banking and road course.

And so it begins, a race that will take them twice around the clock, through the night, through hundred of gallons of fuel, and at this moment, every one is hopeful about winning. In a few hours, they will be lucky just to finish.

Every 45 minutes to an hour, the teams have to stop for tires and fuel, and about every 90 minutes, or two stops, the teams rotate drivers.

The drone is constant and the speed is astonishing. The drivers are pushing like this is a sprint race. Side by side on the banking, late braking into the corners, and putting opposite lock on the steering wheels trying to get traction off the turns. 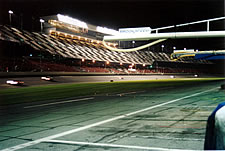 As night starts to fall, you realize that the event is not even one quarter of the way done yet! The darkness makes the cars look even faster. They blast in and out of pools of light created by large over head lamps, and their headlights vibrate and shake under braking and acceleration displaying the beating the cars and drivers are taking.

Their brake rotors are visibly glowing when they brake heavily for turn 1, and the exhausts belch flame and actually cast a glow onto the track under the cars.

The attrition is staggering to witness. Only 29 of the 74 cars will finish this 40th Rolex. All of the hopes of winning are now hopes for survival to the end.

At 1:00 a.m. the race is now half run. The garages have filled with desperate teams trying to piece their cars back together to rejoin the fight. The pit lane is filled with teams trying to catch a few minutes of sleep between pit stops. A flurry of golf carts and pit carts are bringing food, fresh tires and fuel to the pit stalls.

The clock just keeps ticking, and now teams just want to survive until dawn, when the hard racing begins! 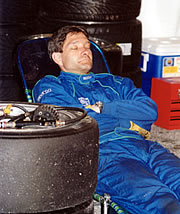 For the teams that make it through the night, dawn is a welcome sight, but there are still six hours to go, and the crews, drivers and machines are weary. The cars are covered in oil spray from other cars, and pieces of rubber ripped from racing tires. Some carry battle scars of contact with tire walls or other cars, and are taped together.

The adrenalin starts to flow again in anticipation of the finish. The complexion of this race changes so many times an hour that is it difficult to predict a winner even up to the last hour. But soon the mathematics start telling the tale that even if the leading cars stopped, there would not be enough time for the chasing cars to make up the time.

But in the end, to the victors go the spoils. Under sunny and cool conditions, at 1:00 p.m., 24 hours and 51 seconds after the green flag flew, the Dallara Judd SRP car driven by Didier Theys, Max Papis, Mauro Baldi and Fredy Leinhard finishes first.

Each driver on the class winning teams receives a gold Rolex Daytona Cosmograph as part of the winning prizes. These timepieces are absolutely coveted amongst drivers, and are incredibly expensive trophies in and of themselves. Retail on these watches is in excess of $12,000 each, and each winning driver in each class gets one.

Time to pack up and go home, but it cannot be emphasized enough that if you are a Corvette fan, or sports car fan of any kind, you owe to yourself to come to one of the most fan-friendly, affordable and exciting racing events anywhere in the world.

Special thanks to my good friend, fellow race fan and business partner, Tom Balliett who supplied the good company and great photographs for this trip and article.

The racing and the rest of the world moves on and moves forward, all the while we remember the heroes and champions we have lost. Here is to a 2002 season that will start and end in a much better fashion than the last. We're off to a good start.

The Corvette Action Center would like to thank Jim Stevenson of Partner in Formula Marketing, LLC for taking the time to write and contribute this article to us and Tom Balliett for his excellent ability to capture the excitement on film and allow us to use the photographs for this article.