The Lifter Oil Manifold Assembly (LOMA) is only used on AFM applications.

DFM is the next generation in cylinder deactivation systems. It features AFM technology with the additional ability to deactivate any combination of cylinder valves to optimize fuel consumption. The control of every cylinder event allows peak efficiency to be obtained throughout the range of engine operation. (Fig. 15) 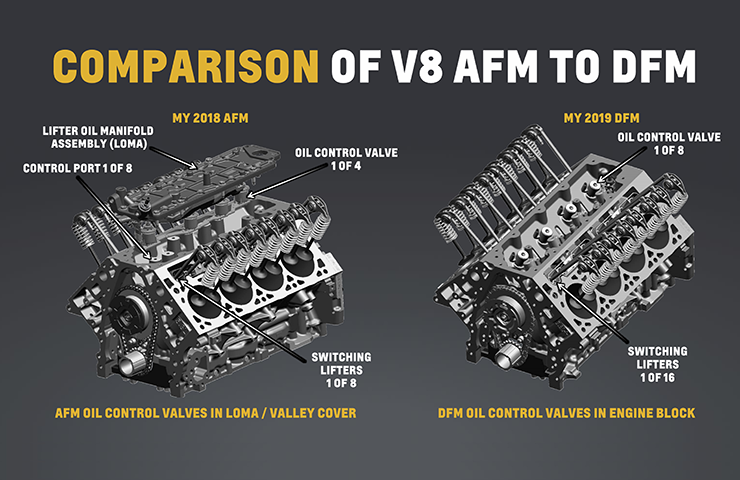 By extending cylinder deactivation to all cylinders, DFM allows for a large variety of firing sequences. DFM can have rotating cylinder deactivation patterns, such as 1/5, 1/3, 2/5, or 2/3, as well as fixed patterns, such as 1/4, 1/2, or 3/4. For rotating patterns, which are only available on small block engine (L84,L87), the cylinders being deactivated can change with each subsequent engine cycle. Transitions between firing sequences is done in a continuous fashion, making the transitions seamless and transparent to the driver.

Oil Control Valves (OCV), only used on small block engines, replace the LOMA. OCVs provide faster response times than the LOMA and are required for DFM. OCVs also are used on L82 engines with AFM.

For additional information, refer to #PIP5663.

– Thanks to Richard Renshaw