Source:   GM TechLink
Date:   April, 2014
The power driver’s seat with memory recall and Easy Exit recall operations on some 2014 Corvettes (with the Memory Package, RPO AAB) may seem to operate erratically or intermittently. To help with diagnosis, it’s necessary to become familiar with the operational characteristics of this all-new system. 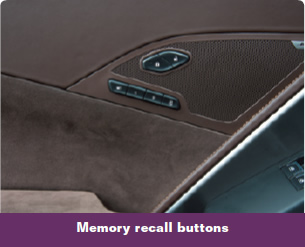 Some common comments include: 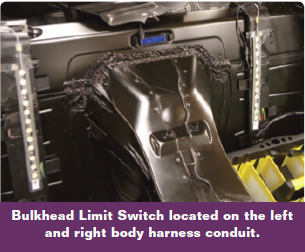 The new Bulkhead Limit Switch, located on the left and right body harness conduit, is used in both seating positions and acts to prevent damage to the body harness and seatback covers when the seat or seatback is moved in a rearward direction. When this switch is active (any time pressure is detected against the rear bulkhead/carpet area directly behind the seats), power seat movement is limited to movements that will bring the seat/seat-back forward.

The new Seatback Unlock Switch, vlocated inside the seatback assembly at the recliner mechanism, is used in both seat positions to prevent the seat from moving further rearward to ensure that the seat-back can return to the normal upright position. When this switch is active (any time the seatback is manually folded forward), power seat movement is limited to movements that will bring the seat/seatback forward.

Both of these switches are viewable with the GDS2 scan tool. Common reasons for the Bulkhead Limit Switch being active are if the Easy Exit setting is stored in a position that applies pressure to the rear bulkhead or if an object is behind the seatback.

Unlike prior models, the new system features unsupervised and supervised modes.

Unsupervised movement occurs when the operator has pressed and released, within 1/2 second, a memory button, which allows the seat to move on its own to a previously stored position.

Supervised movement occurs when a memory button is actively pressed and held, which allows the seat to move only while the operator is supervising the seat movement. Releasing the memory button will stop the seat movement. Only supervised memory recall operation can occur when the vehicle ignition is not in the On/Run Position. If the Bulkhead Limit Switch or Seatback Unlock Switch is active, either no operation will occur or supervised operation will occur, depending on which switch is active and the requested direction of seat travel

The new memory system also allows the operator to enable or disable the Easy Exit Automatic Recall operation of the driver’s seat. This feature recalls the current driver’s previously stored Exit button position when exiting the vehicle. In order for the Easy Exit feature to function, it must be turned on in the Settings menu of the infotainment system. Easy Exit recall automatically activates when one of the following occurs:

TIP: Similar to Auto Memory Recall, the operation of the Easy Exit recall will differ based on Transmission type. Refer to the Supervised/Unsupervised Movements section.

Thanks to Jeremy Richardson