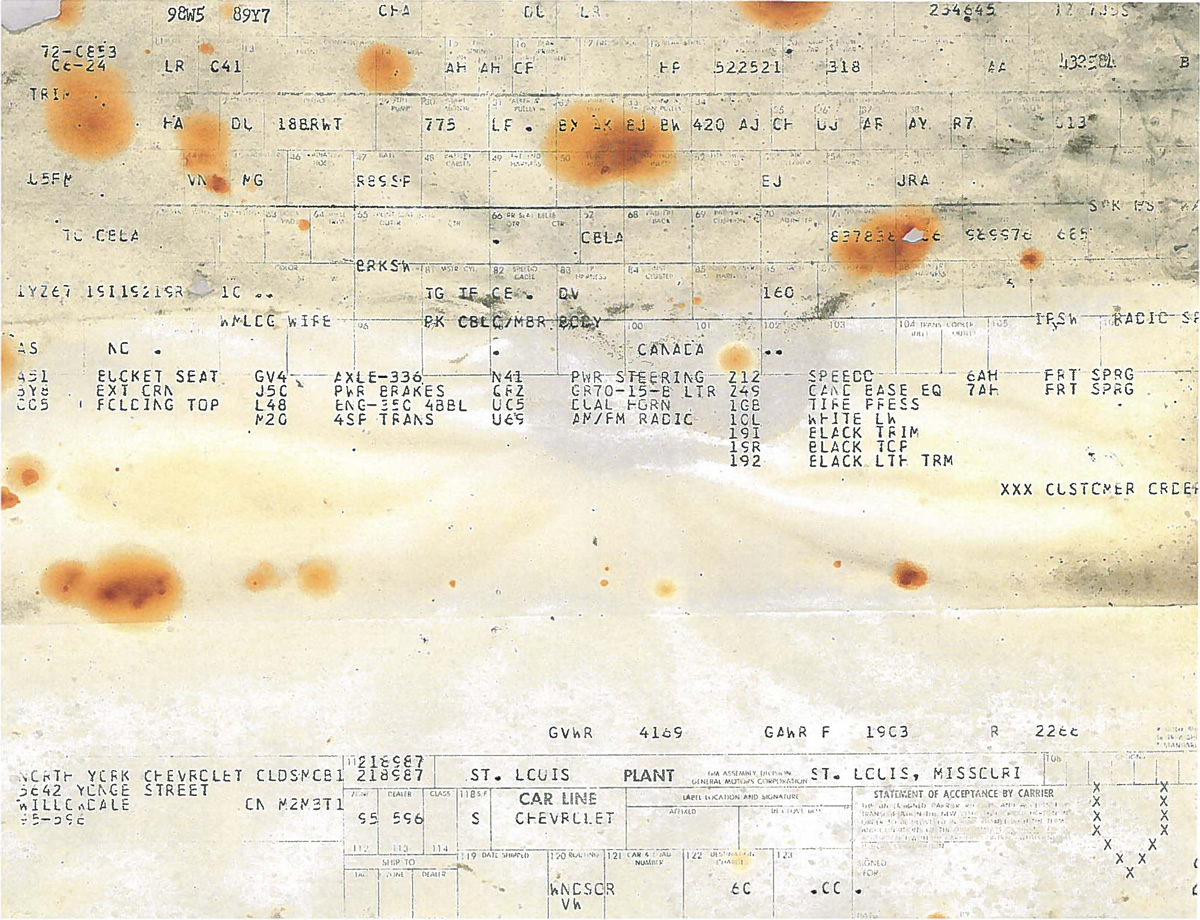 Written and used here, with permission by Arthur Armstrong

This article appeared in the National Corvette Restorer Society's "The Corvette Restorer" magazine, Volume twenty-seven, number three, Winter 2001 issue. It's an excellent article with insight into the existence of, or lack there of, Corvette build records written by a retired GM employee.

Terry McManmon has asked me to write this for The Corvette Restorer with the intention that it may put to rest some, if not all, of the speculation about the Corvette build records. I worked for GM for 37 years and retired November 1, 1999; 24 years were at Chevrolet Engineering and the rest for GM Legal Staff. During this time, I became an expert on GM records, especially the Corvette, as it was my primary research vehicle. I therefore can speak with some authority on the subject.

About four years ago, Jim Perkins, then General Manager of Chevrolet Motor Division, put me and another employee on a Special Assignment to search anywhere and everywhere within GM for the Corvette and Camaro build records that have been so sought after. We spent two months searching the bowels of GM including dusty old warehouses, assembly plants, GMAC, financial departments, accounting departments and many other departments within GM that we thought might have a remote chance of having such documents. We also searched outside GM storage facilities such as Leonard Brothers Archives in Detroit and the Boyers storage facility in Pennsylvania that contained GM data. This was an all encompassing, no holds barred, search that Mr. Perkins authorized. We used his name and position to gain access to various departments. The departments then queried their employees and searched their files and reported to us. Since the request was from the boss, they responded thoroughly and promptly. We then followed up on any promising leads.

The results of our search will not please the Corvette world (and didn't please us either) as we were NOT able to locate the Mother Lode!!! We did find a few production records (about 2 1/2 years worth), not build sheets, back to mid-year 1976. GM already had (has) them back to about 1978.

Although the Corvette was and still is, a low production vehicle, the Engineering Records (of which the build records are just one) were NOT kept separately from other Chevrolet vehicles lines, i.e. Camaro, Corvair, trucks, etc. Chevrolet produced more vehicles than all the other GM divisions combined, and therefore generated a much higher volume of records which were a storage problem.

After final year production, the build records have very little business value to Chevrolet and therefore were not considered to be high priority for retention. GM record retention policy required the assembly plants to retain said documents for only about six months. Some records (including build sheets) were retained longer at the Corvette assembly plants, St. Louis and Flint. However, when Corvette production ceased at these locations, the records were pitched. It should be noted that the current Corvette Assembly Plant in Bowling Green, KY, retained the 1981 - present vehicle manifests that are available now through the NCM. This was against all odds, as there were many movements over the years within GM to destroy them because they had no business value to GM.

Meanwhile, back at the Tech Center in Warren, Michigan, the Chevrolet Engineering Records Retention Policy called for periodic destrcution of non-essential records, of which the build documents were one, and this was carried out on a routine basis. The other GM divisions, Cadillac, Pontiac, etc., had much smaller production volumens and interpreted the GM Records Retention Policy differently and therefore retained said documents.

Owner and restorer (frame-off restoration) of a 1965 L76 Roadster

P.S. I don't have my Corvette's build records either!!!