Conventional sports cars are small and lightweight vehicles that have traditionally sacrificed comfort and convenience for the sake of performance. But current Corvette customers expect high performance as well as state-of-the-art ergonomics, driving comfort, and driver-control-assistance systems (ABS, ASR, real-time damping) to make the driving experience as pleasurable as possible.

The new C5 Corvette's front and rear suspension crossmembers support these performance goals by providing a number of improvements over the previous model's setup. The reduced sprung mass that results from their use improves performance in areas such as lateral acceleration, acceleration times, vehicle test weight class, stopping distance, and fuel economy. The higher local stiffness they provide means better component isolation is possible to reduce noise-energy transmission into the occupant compartment. The machining process used to make the crossmembers facilitates improved dimensional accuracy and repeatability, which contributes to handling precision by reducing suspension geometry variation.

The criteria used to benchmark the crossmembers with those of competitive cars were mass, functionality, fastener count, material, and manufacturability (machinability and casting/fabrication). GM technical experts estimated the cost and investment required for each competitive system studied.

Early in the program, a small group of engineers was responsible for the design of all chassis systems. Brainstorming sessions were held among these engineers and corporate experts to investigate crossmember concepts. These included:

Tradeoff studies were used to select the production designs. A Pugh analysis was used initially to rank the designs. The three most viable were then ranked based on a modified Kempner-Tregoe analysis. The one-piece cast aluminum concept was selected as the basis for the production crossmembers, with technical specification development conducted simultaneously with design development

After the development of the initial design concept, finite element plate models were built based on part geometry data from the wireframe CAD models. The plate models were used to predict crossmember stiffness and general strength characteristics, to assess the impact of design changes, and to provide aniterative tool to improve engineering performance. The coarse-plate model mesh was relatively quick to model and required a small amount of CPU time to run; however, to obtain quick results, accuracy was sacrificed in certain types of analyses. The plate model provided sufficient prediction of static stiffness and general part stress gradients, but model fidelity did not lend itself to accurate absolute stress predictions in local areas.

3D solid finite element models were built by Alcoa, the part supplier, as the design concept stabilized and the production of prototype crossmembers approached. These models were used to assess component durability and strength performance more effectively. They allowed for much more detailed part geometry definition through higherorder element shape functions. They provide greater analysis fidelity in local areas of notches and corners where component stresses are typically highest, though the tradeoffs versus the plate models were increased model complexity and longer construction times.

Preliminary crossmember load inputs from the suspension and powertrain were based on measured data from the previous-generation C4 Corvette. During the design stages before prototype vehicles, loads were estimated based on measured data from existing vehicles retrofitted with the new suspension configuration. Maximum loads on crossmembers measured from prototype vehicles had a wide distribution because many variations of suspension bushings, shock absorbers, jounce bumpers, and powertrain mounts were used in development.

Feedback from the engineering analysis was incorporated into the baseline design through geometry changes in the CAD model. The most challenging issue that drove many analysis iterations was attempting to meet all of the static stiffness targets while achieving the mass requirements. The structural analysis ofthe initial design concepts showed that they exceeded strength criteria but were not meeting stiffness targets at the powertrain mounts and lower control arm attachment points. Subsequent iterations were performed to improve stiffness performance while still reducing component mass.

Finite element analytical models were used early in the design process, in the absence of hardware, to predict and improve crossmember performance. Prototype hardware was later tested to confirm the analytical results and validate part performance.

Quarter- and full-scale models were used for visual verification of the crossmember math path . Quarter-scale stereolithographic models were valuable in helping to communicate design concepts and to discuss design changes with potential suppliers. Full-size laminated object models (LOMs) were used in early vehicle architecture mockups of the Corvette. LOM masters were also used to build prototype sand casting patterns; this resulted in a two-month time saving vs. hand construction of the master models.

As the casting and vehicle design concepts stabilized, the math model was updated to include casting and machining details necessary to ensure part manufacturability. To keep the size and complexity of the math model manageable, typical corner and fillet radii that are called out on the drawing were not included in the CAD models. Too high a level of detail can increase the model size, making it difficult to manipulate the data in the CAD system. This level of detail can also cause the finite element models built by automeshing software packages to be excessively large, which significantly extends costly computer time. Not including all the standard fillets and corners in the math model will likely underpredict the component mass.

In the early concept stage, suppliers were consulted for guidance on manufacturability, piece cost, and investment information. Once the final concept was chosen, an early source was selected for the production crossmembers. The Component Technical Specifications (CTS) and Statement of Requirements (SOR) documents and finished part drawings were given to the purchasing group to aid in the supplier selection process. Once production sources were identified, their manufacturing representatives became members of the cross-member design team so that the design would be optimized for their production processes. The crossmembers are cast and heat treated by the Tier 1 casting source, A-CMI, and then are machined at the Tier 2 machining source, UniBoring, Inc., where the alignment pins are assembled.

Casting---First, the parting lines were determined by the casting supplier. Complexity of the mold, use of sliding cores, and casting mass due to mold draft are greatly influenced by this choice. Initially, all draft angles were 2.5deg., but draft was allowed to increase to 6 deg. for certain long walls in which both sides of the wall were cast in the same half of the mold; this improved ejection from the mold.

A design goal was to minimize the mass increase associated with adding draft to the Tensile casting design. This was accomplished by locating the parting line at the bottom of the vertical walls where possible.

Another goal was to minimize the use of sliding cores in the mold because of the cost and complexity they added to the mold and the additional variability between in-mold surfaces and cored surfaces. Initially, sliding cores were used to cast the lower control arm pockets, but they were eliminated by changing the parting line to become perpendicular to the ears of the pockets. Raised bosses on vertical surfaces were avoided because they could result in undercuts in the part that required sand cores or sliding cores to eliminate die lock. Cored lightening holes were not used in the crossmembers because of the disruption they create in the solidification of the casting, thereby avoiding potential quality problems.

Another consideration was the location of the ejector pin bosses-round pads, typically 14-18 mm in diameter, which are located at the surfaces farthest from the parting lines. The casting source specified the number and general location of these bosses. They are typically at the intersections of walls on short walls, or on walls where they will be completely or partially removed during machining, which greatly reduced the potential mass contribution of the bosses.

Machinability-Initially, cast datums were selected by the machining source and agreed to by the casting source and design engineer. These datums were used to locate the part for the initial machining operations and were useful for relating cast features to machined features.

Unless a sharp corner was needed, every milling operation used a radiused or chamfered cutter to eliminate potential stress raisers. All tapped holes had a shallow countersink for the same reason. The cutter paths were optimized, and where needed, a 45 deg. beveled cutter was used to remove any sharp edges that were generated when machining component interfaces. This eliminated potential handling hazards for the CNC operator and assembly-plant personnel.

A machinability goal was minimizing the number of setups or unique fixtures. As the number of part se!ups on the machine tool increased, the piece cost and machining investment increased and the dimensional accuracy of the component decreased. Each crossmember has two unique planes-the body plane and the suspension plane; every interface feature is either parallel or perpendicular to one of these planes. The crossmembers are machined on four-axis CNC machines with the fixtures attached to rotary tables. This allowed the machining source to develop a process in which each crossmember is completely machined using two fixtures.

The Corvette's crossmembers are just one part of a new structure that contributes to the car's much improved performance. The structural layout of the C5 enables torsional rigidity in an open-roof vehicle, which is said to exceed that of all current production open-roof vehicles by a wide margin. The superior performance of the new structure is attributed by General Motors engineers to diligently applied engineering processes, computer-aided engineering tools, and innovative use of material and manufacturing processes.

The first structural mode in the open-roof configuration approaches typical values measured in similar size fixed-roof vehicles. The figure shows a comparison of vehicle first torsion mode frequency for the C5,C4, and a few competitors.

Static torsion and bending stiffness of an Alpha C5 prototype are shown in the table compared to values for C4 convertible and targa. The C5 with the roof out is over five times stiffer in torsion and two times stiffer in bending than the C4 convertible. The C5 without the roof is also considerably stiffer than than the C4 targa with the roof in. Despite being much stiffer and more accomodating, the C5 structure is 5 kg lighter and the C5 vehicle is in one test weight class below the C4. 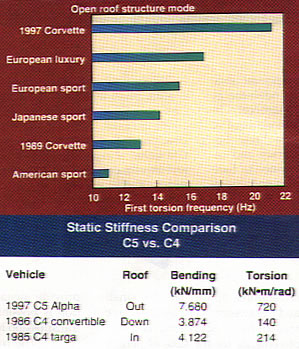