The following text appeared in a GM Press Release that was issued at the Las Vegas SEMA Show in the Fall of 1998.  The Active Handling System, RPO JL4, debuted on the 1998 Corvette and became standard equipment on the 2001 model.

The Corvette Active Handling system is a logical next step in the evolution of enhanced chassis control systems like ABS brakes and traction control.  Working in close concert with those other two systems, Active Handling enhances the accident avoidance capabilities of the already nimble Corvette.  It will be offered as an option (JL4) on all 1998-1/2 Corvette models.  Additionally, it will be a required option on replicas of the '98 Corvette convertible Indy 500 Pace Car.

What Active Handling Does

The Active Handling system activates when there is a significant difference between how the driver intends for the car to corner and how the car is actually cornering.  Working together with the ABS and traction control systems as needed, it automatically applies any of the four brakes to help correct the situation .

A real-world example of this might be a sudden lane change on a wet road surface to avoid a unexpected hazard -- like a huge pothole.

Faced with that scenario, many drivers may turn the wheel abruptly to the left to avoid the pothole.  That input, combined with the reduced traction available, could exceed the limits of traction available to the front tires, and a condition called "understeer" could make itself apparent.  In an understeer situation the car tends to plow straight ahead -- not at all what the driver may want it to do.

In this scenario, Active Handling will work to help correct the car's understeering behavior by automatically applying the left side rear brake, helping to "pull" the car into the left turn.

Once the car is in the left lane, the driver tries to straighten it out, but the car's yaw inertia could cause it to turn even more than the driver wants it to, and a condition called "oversteer" could come into play.  That's when the car's rear wheels lose traction and the back of the car starts to swing around.

Active Handling should once again sense that the car is doing something that the driver doesn't intend, and it will work to help correct it by, in this case, applying the left side front brake.  The resulting torque tends to straighten the car.

Depending on vehicle speed, and the traction available, the car could continue to be influenced by the "whipping" motions that the first two steering inputs created, so a few more steering wheel movements may be required to settle it down -- and Active Handling will continue to apply individual brakes as necessary to assist the driver in maintaining control.

In another scenario a driver could find that he's entered a turn too aggressively, thereby setting up similar understeer and oversteer conditions.  Once again, Active Handling would react to the conditions and work to help bring the vehicle back into control by selectively (and automatically) applying the car's brakes as needed.  How Does It Do That?

Active Handling uses a simple yet sophisticated system of sensors to detect unwanted vehicle manuevers.  These sensors include a steering angle sensor, yaw-rate sensor, lateral accelerometer and sensors in the vehicle's ABS brake and traction control systems.  All of the data that these sensors provide is fed into the Corvette's onboard computer where specially-developed software "reads" all of the inputs and automatically activates the car's brakes selectively to help the driver bring the vehicle back under control.

Steering Angle Sensor:  This digital sensor monitors the driver's steering inputs immediately and communicates the steering angle that the driver has selected back to the system.  It is accurate to within one degree of steering angle change and is located in the car's steering column.

Yaw-Rate Sensor:  This solid-state device utilizes a tiny pair of ceramic tuning forks to measure the actual rate that the car is turning or yawing from the centerline.  This data is continuously fed into the Corvette's computer where the yaw rate is compared to the steering angle.  Any variation beyond a pre-programmed set of values will result in activation of the Active Handling system's assist features.  The yaw-rate sensor on the Corvette is located inside the center console.

Lateral Accelerometer:  The lateral acceleration sensor measures the centrifugal force created in a turn.  The data it provides is weighed against all of the other inputs and is used to calculate whether or not the car's limits are being exceeded for the speed and traction conditions that exist. This sensor is located beneath the passenger seat.

Unique Controller & Software:  All of the information being provided by the sensors mentioned above is processed by the Corvette Active Handling system's computer through a very sophisticated and specialized software package.  This computer is actively linked to the ABS brake system and the traction control system -- all these systems share information continuously. This multiple linkage is vital because the combined inputs from each system make the fully-integrated system better able to respond to a wider variety of inputs from the driver.

The Corvette Active Handling system will be the first of its type to offer dual mode operation.  In addition to an "OFF" mode, in which Active Handling is disabled, the system also allows the driver to select a "COMPETITIVE DRIVING" mode for autocross or gymkhana competitions.  In this mode, the Active Handling system remains fully-functional -- measuring steering, yaw rate and lateral acceleration inputs as well as applying individual wheel brakes as required -- but the traction control system is disabled, allowing for some wheelspin and oversteer that skilled drivers often find beneficial in competitive driving. 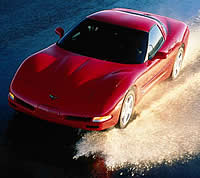 
The "OFF" and "COMPETITIVE DRIVING" modes are important features on a high-performance sports car like the Corvette.  As mentioned earlier, skilled drivers may find that some wheelspin and oversteer can be beneficial to their lap times in competitive events, and the Corvette system allows them to operate the car in this fashion when appropriate.  Chevrolet recommends against selecting these modes for street use.

The overall effectiveness of the Corvette Active Handling system, or any similar system, is directly related to available tire traction and the aggressiveness of a given maneuver.  Active Handling is designed to work to use existing traction to assist the driver -- but it cannot overcome the laws of physics.  The Active Handling system reacts only in extreme situations, and special care should be taken when the system does activate because it's a clear signal that vehicle or tire limits are being exceeded.