This article was written by Hib Halverson, a technical writer and Corvette Action Center Forum member who, at one time or another in the last 20-years, has worked for every Corvette magazine that is distributed nationally, including Corvette Quarterly, Vette and Corvette Fever. He is best-known in the Corvette community for the "Big-Block from Hell" and "Purple Project" series he's written for Vette Magazine.
Hib was present that day back in 1990 when the Corvette ZR-1 set the 24-hour World Speed Record. This story is his account of the event.

On March 1-2, 1990, near Fort Stockton, Texas, a unique group of people using a Chevrolet Corvette ZR-1, reset The 24-hour World Speed Record. That achievement proved unequivocally that the car is indeed...King of the Hill.

"The 24" had stood for 50 years. Last set at Bonneville in 1940 by Ab Jenkins driving the "Mormon Meteor III", a purpose-built, single-seat, race car powered by an aircraft engine; it was the last, significant pre-World War II record to fall.

The "Corvette Endurance Epic" had simple objectives: set The 24 as well as 5000 kilometer and the 5000 mile marks with a ZR-1 while using an L98-powered Corvette to set the six-hour record and other shorter distance marks. Reaching those objectives was anything but simple.

The venue, a 7.712-mile oval owned by Firestone Tire, although having banked turns and ideal length, lacked fences to keep wildlife out. At speeds needed to break records, hitting a 50 lb. coyote would at least be catastrophic and possibly fatal.

As the track also lacked retaining walls, loss of control in a turn would have frightening consequences. A Corvette would rocket over the edge of the banking, fly 375 feet and crash to the ground. Because of the track's size, a driver might wait 10 minutes for help to arrive.

Barring off course excursions, setting The 24 still required great courage. Turn Three took nerves of steel. Coming off the back straight, the ZR-1 was downwind at 188-192 mph. For each driver's 80-minute stint, It was foot to the floor the entire 7+miles around the track. To set The 24, one can not lift.

...And, what about the ZR-1? Would its LT-5, 5.7-liter, four-cam V8 run 5500 rpm for a day? Could the transmission and the differential stand the heat? What about accessory drives, suspension, brakes, radiator hoses...?

This type of motorsport put more stress on a driver than does any race. Nevertheless eight believers in the Corvette mystique volunteered. They were: 1989 SCCA ESCORT Champion and Manager of Corvette Development, John Heinricy; Corvette Challenge driver, Scott Lagasse; Corvette Group Engineers Jim Minneker and Scott Allman; Showroom Stock racers Don Knowles and Kim Baker; race team owner/driver, Tommy Morrison and lastly, Stuart Hayner, known to Road&Track Corvette readers from last year's ZR-1 test, who summarized: "We came down here for one purpose...to set a new World Record. We knew going in it wasn't going to be easy. No one sets records without taking chances!

The attempt began in the summer of 1989 with a meeting PR representative, Peter Mills, had with Hayner. Mills mentioned an IMSA GTP Porsche team who told him, amazingly, that a 962 lacked durability enough to break Jenkin's half-century-old mark of 161.180 mph. Still others tried. Ford (1969), Mercedes-Benz (1976) and Audi (1988) all failed...while the ghost of David Abner Jenkins laughed.

Two cars were built and tested during the fall and winter. The Mobil/EDS/Goodyear Corvette chassis were stock except for: no side mirrors, lowered front end, reinforced front air dams fitted with ultrasonic "anti-animal" whistles, no rear antiroll bars, transmission and differential oil coolers, 3.07:1 axle ratio on the ZR-1 and a 2.72:1 for the L98 car and 25.5x12.0-17 Special Radial tires that Goodyear built for this effort. Replacing the passenger seats were EDS telemetry systems operated by GM's Service Technology Group. The cars were heavy carrying a roll cage, other safety equipment and 48 gal. fuel cells. As FIA rules require "non-consumable" spare parts (brake rotor, radiator hose, alternator, etc.) to be carried in the car, 300 lbs. of spares were in two suitcases lashed to the cages' rear tubes. Replacements had to come from this stock and, if a failure was such that a car could not get back to the pits; the driver, working alone, had to fix the car. Ab's ghost to smiled even more.

The LT-5 was picked right off Mercury Marine's Stillwater, Oklahoma assembly line. Less catalytic convertors and mufflers, but with revised engine management software, its horsepower was about 405. Tests had shown speed necessary to reset The 24 would come at 5500 rpm in fifth gear so the engine had a stop at 70% throttle. 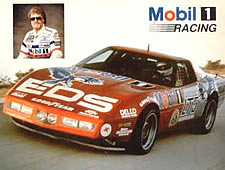 The L98, built by Kim Baker, used a production cylinder block, crankshaft and connecting rods but had pistons of 11:1 compression ratio. It used a production camshaft but with high-ratio rocker arms to increase valve lift. Production cylinder heads and a stock fuel injection system were modified to increase air and fuel flow. Less converters and mufflers, the L98 generated about 350 horsepower and was run at wide open throttle the entire time.

In the third week of February, Tommy Morrison, who marshaled the attempt, brought the group together at Ft. Stockton. Present were: the drivers; the Morrison Development Team under cool-headed Crew Chief, Tommy Roe; technicians from GM's EDS Division and STG Group; a contingent of Goodyear engineers; agents of associate sponsors; various GM PR functionaries and, lastly but certainly not least; representatives of the United States Auto Club who officiate FIA record attempts in this country.

The Endurance Epic began at 9:56 a.m. on March 1. Lead drivers were Heinricy in the ZR-1 and Morrison in the L98. Heinricy, after his first drive: "Getting through the first pit stop was an important point for me. I felt a whole lot better when I watched that car leave after my stint." Typical of Tommy Roe's crew, the first and all succeeding stops went like clock work.

By 3:56 p.m., the L98 had five FIA Category A, Group II, Class 10 records, including six hours at 170.887 mph. The car was withdrawn, certified by USAC, then trucked to Dallas where it was airfreighted to Switzerland for the Geneva Auto Show.

The ZR-1 continued. In the afternoon, Mother Nature worked for Ab Jenkins. Don Knowles, during his afternoon turn, drove through intermittent drizzle and snow flurries. Hayner had his most "exciting" stint near sunset. The radio crackled "There's a coyote!" Later he told us,"He came over the outside into my lane...stopped, looked at me for a split second then went back over. That really got my attention."

After dark, in spite of the brightest Hellas available, the drivers were always over driving their lights. Plus, if the car did go off course, it was understood by all that the Ft. Stockton fire/rescue squad, who thankfully stood by the entire time, would have a tough time finding a the ZR-1 after a 1/8-mile, night time slide into the west Texas wildlands. "This record stuff," so said one of Roe's crew,"is a challenge in daylight but, at night...it's damn scary."

Dawn brought clear weather. The ZR-1 was running flawlessly. Just before ten, the coveted 24, the mark that withstood a half-century of assaults by other manufacturers, fell to a near-stock, overweight, Corvette ZR-1. The whole group was ecstatic but the campaign would wait...on to the 5000 mile mark.

Incredibly, with eight laps to go, the only mechanical problem of the Endurance Epic occurred. A coolant leak, a result of a hose chaffed by the fan shroud, developed. John Heinricy: "Even though, I knew we already had the record (The 24), my first emotion was a huge let down. We'd worked so hard to go down now."

So why all the tough work, why all the hard driving, why all the chance taking? John Heinricy and Tommy Morrison answered that best. Heinricy: "Probably the main reason people buy the car is its image, particularly its racing heritage. I like to do things to promote its image...the Corvette mystique. World Records are just another reason to want a Corvette.

Tommy Morrison: "To me this was a very sacred thing we set out to do, break a record that's 50 years old. It was very difficult to achieve, but we're avid Corvette people. I've owned Corvettes since 1962 and there's nothing I wanted to do more than break this record."