Ron Cherry: A ’61 Corvette with the right stuff 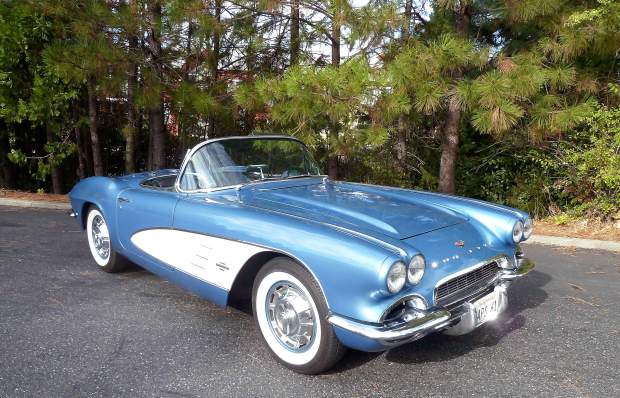 This Vette’s Jewel Blue paint was available only on Corvettes in 1961. With Ermine White coving and spinner-style hub caps, it’s a real eye catcher - by Ron Cherry
0 comment 0LinkedinEmail

by Ron Cherry
Special to The Union

Military pilots often have “the need for speed” that doesn’t stop when they touch ground, and they want a car that will fulfill that need.

According to what they drove in the movie “The Right Stuff,” it often took the shape of a Corvette. When now-retired Naval aviator Capt. George “Cap” Wallington graduated from flight school, he said, “It was the thing to do among pilots, buy a Corvette. I was married and couldn’t afford it. I always wanted one and thought I should have one, but it took 50 years.”

When a neighbor of his pulled up in a ’60 Vette, Cap walked up to him and said, “You can’t do that.”

“What?” his neighbor asked.

So Cap and his neighbor went inside and started searching the Internet to find a Vette for Cap. He wanted a C-1 (1953-1962) for the body lines and found one for sale by a dealer in Texas.

The write-up said it had gone through a frame-off restoration and been repainted in the original Jewel Blue with Ermine White covings. It had a 283 CID high-performance, 270 HP engine with factory dual carbs and a Duntov cam with solid lifters that was mated to a 4-speed trans.

Although it did not have the removable hardtop, it did have the soft top. The car had few other options, just an AM radio and heater, but was in great condition.

It was a numbers-matching car, proving it had the original engine. It sounded exactly like what Cap was looking for and he hopped on a plane for the Lone Star State.

After seeing the car, he made the deal and had his Vette transported home to California. Since buying it, he has had very few issues with the car. Other than normal maintenance, he has rebuilt the carbs once and replaced the radiator with a new aluminum one, which solved an overheating problem.

Full Story: Ron Cherry: A ’61 Corvette with the right stuff

EDITORIAL: GM Needs to Communicate with its Dealers!

Corvette Engineering Team to Return to the NCM...

Corvettes at Carlisle Returns to Full Strength Next...

Are You the Mid-Engine Corvette Zora?