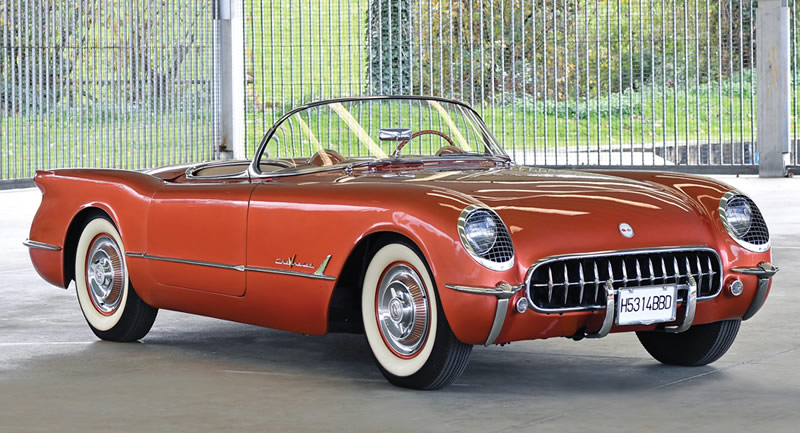 What you’re looking at here is the 22nd Corvette built in 1955 and one of 15 Copper colored Corvettes built that year. Located in Spain, it’s been carefully restored, and as you can see, is presented in immaculate condition – resprayed in its original copper paint with creme interior and matching fabric roof. It’s set to cross the auction block in February 2017 as part of RM Sotheby’s Retromobile sale in Paris, France. Below is the actual auction listing:

Nineteen fifty-five was a very good year for the Corvette, and arguably the year that saved the model from extinction. For the 1955 model year, Chevrolet finally did away with the anaemic ‘Blue Flame’ straight-six and replaced it with the 265-cubic inch V-8, bringing much needed performance and soul to America’s Sports Car.

As in years past, most Corvettes left the factory finished in Polo White with a Red interior. However, a handful of cars were finished in other colours. The rarest colour for the 1955 model year was Corvette Copper, used on only 15 cars. Of those, only four examples are known to exist today, one of which is that presented here.

Adding to its provenance, this is the 22nd Corvette built of 700 produced for the model year. In the custodianship of its current Spanish owner, the Corvette was fully restored to its original specifications. Attesting to the car’s original colour, the rear wall of the trunk was preserved with the original Corvette Copper, as found during the restoration. Furthermore, it is worth noting that the car is accompanied by a small restoration booklet produced by the owner, which includes photographs of the restoration process from start to finish.

A splendid example both inside and out, this very rare Corvette represents a landmark year in Corvette history and will certainly stand out amongst its peers.

Click on the images below to see a larger view: