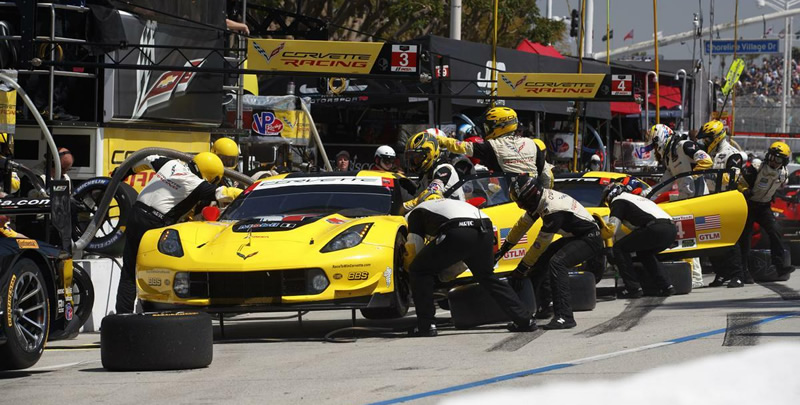 CORVETTE RACING AT LONG BEACH: Second and Third in Another Thriller

Antonio Garcia and Jan Magnussen placed second in the GT Le Mans (GTLM) category of the IMSA WeatherTech SportsCar Championship with their No. 3 Mobil 1/SiriusXM Chevrolet Corvette C7.R. They were followed closely by Tommy Milner and Oliver Gavin in the No. 4 Corvette in third place.

As was the case for the last handful of years at Long Beach, Saturday’s race was a topsy-turvy affair up to the finish. After finding misfortune while leading the last two years, Garcia and Magnussen finally had luck turn their way. After Garcia began fifth, the No. 3 Corvette gained a spot during its lone pit stop under caution 40 minutes into the race.

Rejoining fourth, Magnussen immediately began hounding the third-place Porsche. He made the move going into the first corner with 23 minutes left and set out to run down the second-place Ford.

Meanwhile, Gavin began third and set the fastest GTLM lap of the race before handing off to Milner. Looking for a third straight Long Beach class victory with his teammate, Milner went from sixth to fourth with seven minutes remaining. He continued his challenge as Magnussen caught the second-place car with two laps to go. The No. 3 Corvette moved into second when the Ford ran out of fuel on the final lap, and the two cars made contact. Magnussen was able to continue with Milner right behind to the finish.

Corvette Racing’s next event is the Acura Sports Car Challenge at Mid-Ohio on May 3-5.

ANTONIO GARCIA, NO. 3 CHEVROLET CORVETTE C7.R – SECOND IN GTLM: “Things happened for us but not against us like in previous years. So that’s a plus! We aren’t used to having trouble-free last laps here. I told Jan with my luck, I don’t know if I would have made it to the end! It was a tough position to switch our strategy here. Jan is a great qualifier here, so it was tough for me to discover qualifying after all these years of him doing it. So I did my best. I think I had a car to qualify on the first row, but we know GTLM is super-competitive. In the race, I got stuck behind the 66 so all I could do was save fuel. It helped us jumped the 4 Corvette in the pits and we almost got the Porsches. After that, Jan did a magnificent job with managing the tires and fuel. I’m happy keeping it this way! I know I’ll qualify better next year, so maybe we can do that and win the race.”

JAN MAGNUSSEN, NO. 3 MOBIL 1/SiriusXM CHEVROLET CORVETTE C7.R – SECOND IN GTLM: “The end was pretty crazy with the 66 running out of fuel ahead of me. I thought I was going to get stuck behind him, so I had to get on the throttle full to push him out of the way to get that last half-lap back to the checkered flag. Corvette Racing did a fantastic job setting the car up and thinking about what we needed at the end of the race. I don’t know if we had the best car, but it was close. I’m super happy today. For sure we’d like to get a win soon. We’ve caught up in the championship so it’s a good day.”

OLIVER GAVIN, NO. 4 MOBIL 1/SiriusXM CHEVROLET CORVETTE C7.R ‘ THRID IN GTLM: “You can’t take your eyes off things at this race… not for one second. It’s a crazy, action-packed event. My stint was relatively straight-forward. I had a few bits and pieces I had to be careful of at the start. We had an early caution, and I was mainly shadowing the two Porsches. I kept thinking about where we were going to be when it came to that pit stop, if it was going to go green all the way. It didn’t so we all came in together. It looked like we were going to be good but got caught out slightly with everyone else on fuel, and everyone went a little shorter than we did. We were out running around in fifth, and Tommy did a fantastic job to get by one of the Porsches. Then it was just rolling those laps off. That last lap again was crazy with how everything unfolded. At the end of the day, we’re happy with good points and a podium but we really would have loved a win.”

TOMMY MILNER, NO. 4 MOBIL 1/SiriusXM CHEVROLET CORVETTE C7.R – THIRD IN GTLM: “This race and this race track lead to racing like this. There’s a lot happening at every stage of the race with our race, prototypes racing their race…you combine that for 100 minutes with everyone going from the word ‘go’, you’re going to have fireworks here and there. In the end, it’s a pretty good result for Corvette Racing. We can’t be too unhappy with second and third. We had a good Corvette today. Track position is really big. The Ford being out front there holding us up a little bit didn’t help for sure, and we lost a spot or two on pit lane as well. It’s one of those things. This racing is about tenths of seconds and every little thing counts. You have to have a really, really good race to get wins. That’s why when you win it feels so good. Even so, a second and a third felt like a good result for us today. Tt felt like there was a little bit more for us today. Certainly getting a win for us would have been a great challenge. We had a great car and it was a good drive for Olly at the start there. We’re pumped to be on the podium again at Long Beach. It’s not a win, but we will take it!”

CORVETTE RACING AT WATKINS GLEN: Back to Racing in the U.S.

CORVETTE RACING AT SEBRING: A Florida Sweep for No. 3 Corvette C7.R