The infotainment touch screen may be blank after start-up and in Reverse, a rearview camera message may be displayed, and there may be Bluetooth® and navigation system conditions on the following models equipped with radio-infotainment system RPOs IO4, IO5, IO6 or RAO (except with RPO UPF): 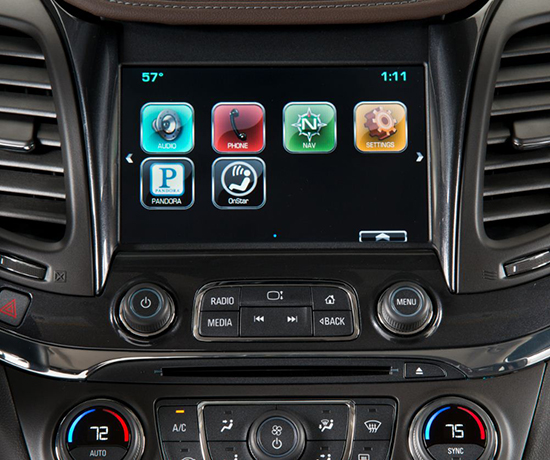 Some possible Bluetooth conditions include the screen not returning to the Home screen after ending a call, cannot call contact work/mobile number for more than one contact with the same name, and issues concerning speech recognition.

Some navigation conditions include no results found after performing an address search with an incomplete address, the selection of a Point of Interest address delivers a wrong destination position, and the map freezing when panning in the 10k zoom scale.

An updated software calibration has been released to address these conditions.

Update the Human Machine Interface (HMI) module using a USB flash drive and the Service Programming System with the files available on TIS2Web.

After USB programming has been completed, reprogram the HMI module using the Service Programming System with the latest calibrations available on TIS2Web and then clear any DTCs.

TIP: The vehicle modules must go to sleep for five minutes after programming the HMI module. If not, the vehicle may have a blank screen, no sound, no touch response, or the wrong splash screen may appear on the screen. If this happens, turn off the vehicle and wait the required five minutes before starting the vehicle again.

- Thanks to Ryan Dorland and Hassan Abdallah