The following article appeared in the Spring 2014 issue of the NCRS Corvette Restorer, written by Mike Ingham and is used here with his permission:

This story concerns the Low Tire Pressure Warning System (LTPWS) which began on Corvettes in 1989. More specifically, it concerns our 1990 ZRl and the things I have learned about its LTPWS.

In 2011 we made our first attempt at passing the NCRS Performance Verification (PV) with this car at the California Capital Regional in Sacramento. The car failed due to problems with its heating system, but that is another story. Thankfully, the team leader completed the PV so we could identify other problems we might have with the car.

In the final section of the PV entitled "Following Road Test," the car is checked to verify that no trouble codes have been stored in the Electronic Control Module (ECM). Next to that item on our score sheet was a handwritten note: "LTPWS codes 34, 44, 54." In checking with the team leader, we learned that while checking the ECM for stored trouble codes, the Service LTPWS light on the Driver Information Center (DIC) had blinked out the noted codes.

I began to research this problem after we returned home following the meet. The LTPWS is discussed in two sections of the factory manuals for the 1990 Corvette: Section 3E, pages 9-15 of the service manual, and section 8A-48
of the electrical diagnosis manual. However, neither section mentions the diagnostic fault codes noted on the PV through a series of troubleshooting flowcharts in order to identify the source of problems in the LTPWS.

Some time back I had purchased a set of fault-code diagnostic plugs and a manual from well-known C4 expert Gordon Killebrew. I consulted that manual’s section dealing with 1990 Corvettes and again there was no mention of fault code diagnosis for the LTPWS. However, beginning with the 1991 model year, Gordon’s manual describes how to use his grounding plugs to diagnose fault codes in the LTPWS.

For 1991 models, Gordon’s manual indicates the three fault codes noted on our PV score sheet (34, 44, and 54) correspond to faults with the left rear, left front, and right front wheel tire pressure sensors. Assuming for the moment that these codes were also correct for our car, I could not bring myself to believe that three of our tire pressure sensors had failed simultaneously. My thought was to erase the three codes and take the car out for a drive to see if any new fault codes registered. 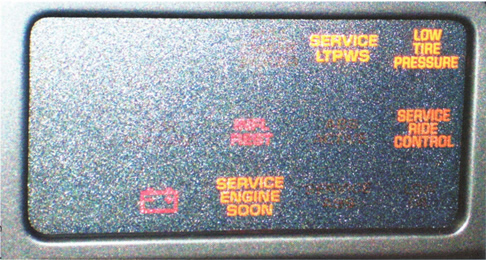 For the 1991 Corvettes, ECM and LTPWS fault codes can be read out using the same diagnostic plug from Gordon’s kit, which in this case grounds Pin B to Pin A in the assembly line diagnostic link (ALDL) connector located under the dash just above the driver’s right knee. I determined that I could use that same plug to read out the fault codes on our 1990 Corvette, despite the fact that there is nothing in either Gordon’s manual or the GM factory service manuals to that effect. 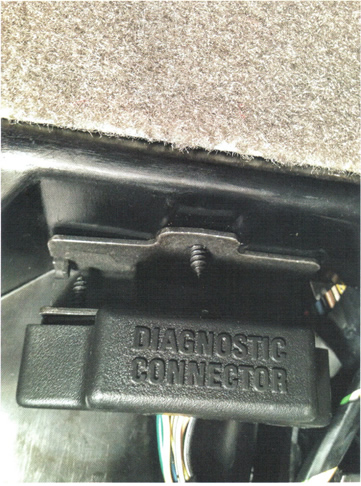 I consulted a number of knowledgeable C4 folks about my problem, and each provided further suggestions and encouragement. But the person who finally put me on the right track was Lonnie Aksamit, a GM service technician in Arizona who is very familiar with C4 diagnostics. Lonnie explained to me that the fault codes in the LTPWS could not be erased using the same procedure that works for the ECM. Instead, what I needed was a scan tool compatiblewith the GM electronic systems. Fortuitously, I had purchased a Vetronix Tech lA diagnostic tool on eBay complete with a mass storage cartridge containing information on GM vehicles ranging from 1988 to 1996, but I had not yet tried that tool on our Corvette. Lonnie encouraged me to do so, indicating that the tool was very user friendly and self-explanatory.

I plugged the Tech lA into the ALDL connector and it immediately came to life, asking me a series of questions about the car: model year, VIN, etc. I entered the data for our car and began searching the various sections of the diagnostic module for information about the LTPWS. As was the case for the factory service manuals and Gordon’s manual the module contained no information about LTPWS diagnostics for 1990 Corvettes.

At this point, I decided to start over by lying to the Tech 1 A and telling it the car was a 1991 model. Upon looking in the body section of the module, I found the LTPWS diagnostics. The tool allowed me to both read the fault codes, and to erase them by pressing the proper key, which I did. I have since taken the car on several long drives and no LTPWS fault codes have been set.

So what do I make of all this that is helpful to other owners of 1990 Corvettes (and perhaps ’89s)? My theory is that GM had incorporated all of the electronics needed to diagnose faults in the LTPWS into the systems intended for production in 1990 models, but too late to get those diagnostics documented in the 1990 service manuals or incorporated into the scan tools used by GM service technicians. This may be equally true for 1989 models but I have not had the opportunity to work with one of them to verify if that is the case. In any case, just know that if you have a 1990 Corvette and your Service LTPWS light comes on, you can read the fault code( s) that triggered the light by grounding Pin B to Pin A in your ALDL connector and reading the codes flashed by the Service LTPWS light in the DIC. Better yet, buy yourself a scan tool with the proper software and plug it into the ALDL connector; you’ll just need to tell it that the vehicle is a 1991 model.