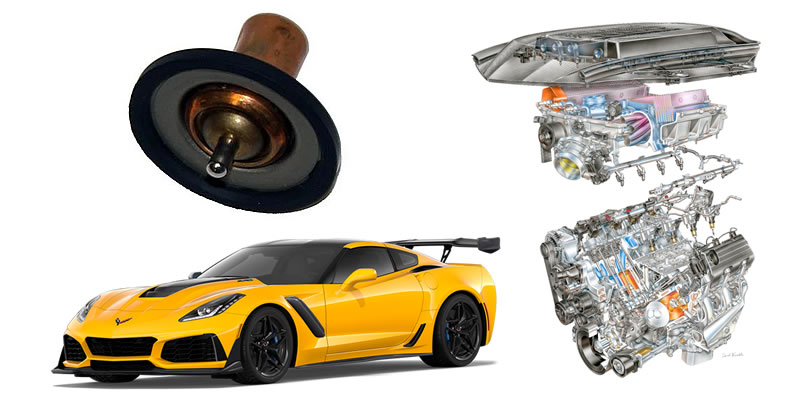 One of the first changes we made to the CAC’s ’19 ZR1 was replacing the stock, 194° thermostat with a Weapon-X 180° ‘stat (PN SD180LT1). The goal with that change was lower engine coolant temperature (ECT) during highway driving as well as lower ECT during aggressive driving at higher speeds.

On a C7, regardless of which engine is in the car, LT1, LT4 or LT5, a thermostat change is pretty easy. You drain the radiator–in the case of the ZR1, drain just the main radiator. Remove the duct–properly termed the “upper air baffle extension”–that runs from the back of the radiator to the hood vent. Disconnect the upper radiator hose and the steam hose that runs between the thermostat housing and a tee in the surge-tank-to-radiator pipe. Then remove the three housing bolts and pull out the ‘stat.

Install the Weapon-X 180 in place of the OE thermostat. Put the big spring pack in place. Then push, twist and lock the bottom cap in place. Put the thermostat assembly back in the front of the engine, install and hand tighten the three housing bolts. Torque each bolt to 10-Newton-Meters or 89-inch-pounds. Finally, reconnect hoses, reinstall clamps and screw the baffle extension back in place.

I’ve had Weapon-X’s 180 ‘stat in my LT5 for a couple of months now. There were no problems installing it. No problems with leaks and on the highway the temperature is 180-183°. I have not run the car on a chassis dyno with the 180 installed, yet, but in driving where I’m running the engine harder than I would just cruising on the highway, the ECTa is lower than it was in similar situation with the stock thermostat. The price was 60 bucks which is a lot less expensive that some alternatives which consist of the whole assembly rather than just the thermostat core by itself. The Weapon-X 180 is also 10 bucks less than Katech’s thermostat cores.

Weapon-X also sells a 160° version of this thermostat.  For more information, see the Weapon-X web site.

It’s official! Power numbers for the 2015 Corvette Z06 have been released

Who Says You Can’t Drive a Corvette in the Winter?