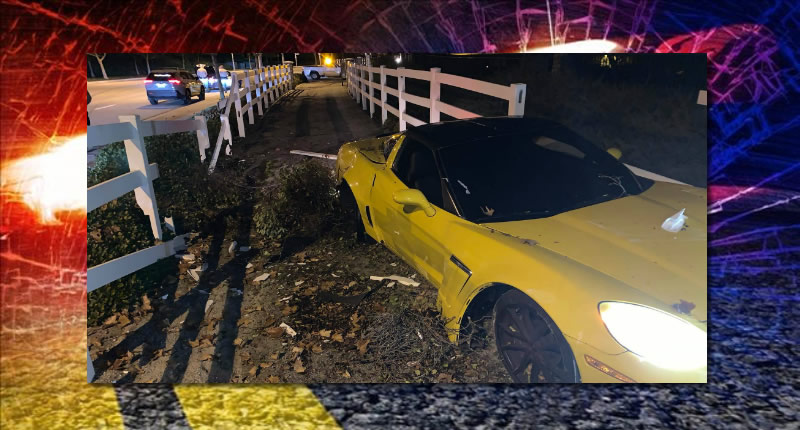 Santa Clarita, CA – Last week, a yellow C6 Corvette Grand Sport that was left unattended with the engine running by its owner was stolen.  A short time later, the thief lost control of the Corvette crashing it through a fence and into a tree.

When authorities arrived, they found the severely damaged Corvette abandoned with its lights on.  As of this writing, the local sheriff’s department could not confirm if they had a suspect in custody.

“In an odd series of events, a yellow Corvette left the roadway overnight and slammed into a tree and a fence before landing on an equestrian trail along Avenida Rancho Tesoro north of Copper Hill in Valencia. Deputies were dispatched to the area around 10 p.m. and found the vehicle, but did not find a driver. The significantly damaged sport car was abandoned with its lights on. Two sets of fencing were destroyed and dark tire skids were found across Avenida Rancho Tesoro.”  – Posted by Austin Dave on Friday, December 13, 2019

Just a friendly public service announcement folks:  please do not leave your cars running while you run into a convenient store.  I see this all the time, and it blows my mind that people do this.  It only takes seconds for a thief to jump into a parked, running car, put it gear, and take off, leaving you stranded, and your insurance company wanting an explanation.

According to the National Insurance Crime Bureau, the number of vehicle thefts due to drivers leaving their vehicles running has increased 56 percent over a three year period (2015 – 2018), and 88 percent in the past five years. Between 2015 through 2018, 229,339 vehicles were stolen this way which comes out to an average of 209 thefts per day.  Because of the nature of the theft, these numbers could be higher because it’s unsure of owners report that they left their vehicles running to the police and insurance companies.

Chime in With Your Thoughts in the Forums >>>

Time is Running Out to Win a Pair of Iconic Corvettes