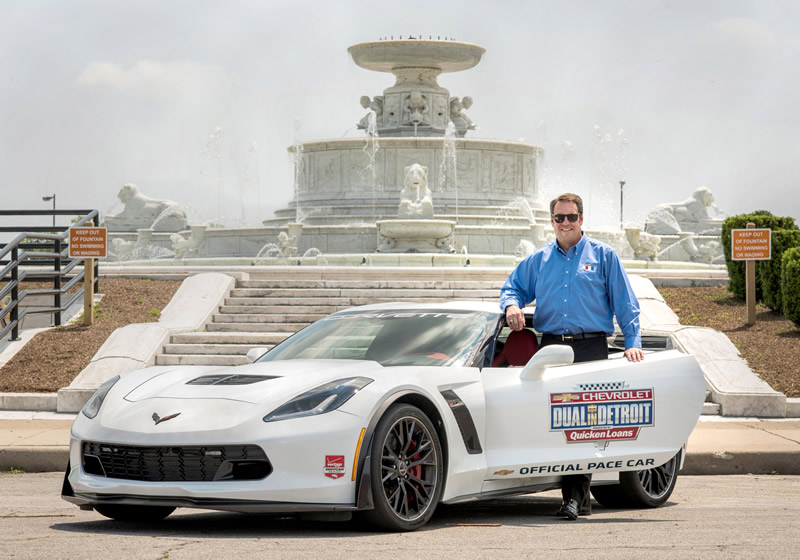 GM executive, motorsports fan will lead the pack at the Chevrolet Dual

DETROIT – Mark Reuss, the top product development executive at General Motors and avid motorsports fan, will pace drivers behind the wheel of a Corvette Z06 this weekend for the Chevrolet Dual in Detroit presented by Quicken Loans.

The two races take place Saturday and Sunday, May 30-31 – only about 2.5 miles from Chevrolet’s Detroit headquarters – as the next events in the Verizon IndyCar series.

“I’m thrilled to drive the Corvette Z06 pace car at this year’s Grand Prix,” Reuss said. “Growing up here and having the opportunity to help bring this great event to racing fans in Detroit has been very exciting, and the privilege of driving the pace car makes it even more special for me.”

Reuss, executive vice president of Global Product Development and Global Purchasing and Supply Chain, is no stranger to racing. He is a certified industry pool test driver on the North Course of the Nürburgring track in Germany. He also created and led the GM Performance Division in 2001, when he was responsible for GM racing vehicles, as well as production versions of Chevrolet SS models and the Cadillac V-Series.

“This race is quintessential to the world of motorsports and Chevrolet,” said Jim Campbell, Chevrolet U.S. vice president of performance vehicles and motorsports. “Mark has always lived and breathed performance cars, so it’s perfect to have him behind the wheel of the most powerful and capable production car ever made by Chevrolet.”

The Corvette Z06 pace car is similar to the one driven by NASCAR champion Jeff Gordon at last weekend’s Indianapolis 500, including an Arctic White exterior and Adrenaline Red interior with a special graphics package and safety strobe lights. It boasts 650 supercharged horsepower, a seven-speed manual transmission and a track-capable chassis system.

0
0   0
previous A 1957 Corvette Comes Home - A Second Time Around
next Video: Here's What Not to do With Your Corvette!