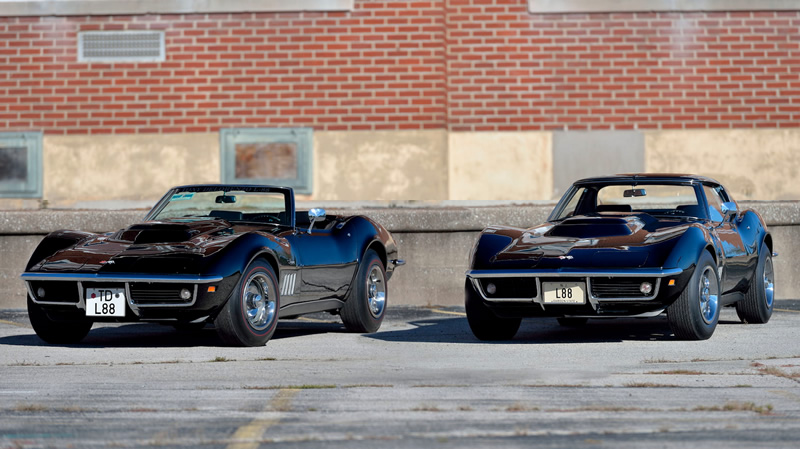 The Art That is The All New 2020 C8 Corvette Interior

The 2020 C8 Corvette Gets Its Amazing Exhaust Sound From Tenneco, Inc.

Over the decades, several special, high performance Corvettes have been built by Chevrolet, but none of them have the beast-like L88 Corvette.

The legendary L88 Corvette was the brain-child of Zora Arkus-Duntov, the father of the Corvette and was specifically built for racing in mind. He wanted to build a high performance Corvette that would put the fear of death into Enzo Ferrari and Carroll Shelby.

Starting in 1967, the L88 Corvette was powered by a highly modified version of Chevrolet’s 427 big block engine that produced between 540 and 580 gross horsepower. At the time, the bean counters at GM were discouraging competitive automotive racing. As a result, the L88 was developed in a kind of skunk-works environment and was advertised to the public as only having 435 horsepower to appease the insurance companies, and dissuade the general public from buying the car.

Between 1967 and 1969, only 216 were built. Many of them went on to land in racers’ hands and were successfully campaigned in competitive racing around the world. Others were purchased by private owners who knew this was an exceptionally rare type of Corvette and because of their racing nature and lack of casual road-side manners, were rarely ever driven.

These two 1969 L88 Corvettes are a perfect example of that.

Offered up for auction by Mecum Auctions in Kissimmee, Florida this coming January, you could have the chance of owning not one, but TWO 1969 L88 Corvettes. The convertible, serial number 720068, was purchased new by Corvette Racing Legend, Tony DeLorenzo while the coupe, serial number 728007, comes with only 2,000 original miles on the odometer.

Below is the auction listing for these awesome Corvettes from Mecum Auctions:

L88 Corvettes have always been at the top of the pecking order both in terms of rarity and desirability. In a mere three years from 1967-69, only 216 L88 Corvettes in total were produced with the incredible engine. Tuxedo Black, one of the most sought-after Corvette paint colors, graced both of these L88 Corvettes from the factory. These two L88 Corvettes, one coupe and one convertible, will be offered together as a pair at the 2019 Kissimmee auction. The L88 convertible was purchased new by Corvette racing legend, Tony DeLorenzo, and boasts impressive documentation. The L88 coupe retains its original L88 427/430 HP V-8 engine and has been driven just 2,000 original miles since new. What an incredible pair of L88 Corvettes.

The unusual beginnings of this highly decorated 1969 Chevrolet Corvette L88 Coupe are detailed in a letter from Tony Franchi, who enjoyed a long career at Wigder Chevrolet in Livingston, New Jersey, the car’s selling dealer. Written in 1995 to the car’s then-owner Bob Rush of Clewiston, Florida, the letter describes how the original purchaser left the car stored at the dealership “for the longest time.” When the customer finally arrived to collect his new car, he showed up with a flatbed trailer and winched the L88 onto the trailer deck without it even having been put through a pre-delivery inspection. When asked by a dealer employee what he would do with the car, the customer’s reply was straightforward: “Put it away.” Indeed, that is exactly what happened, because it never appeared at Wigder Chevrolet again.

The car was awarded both Bloomington Gold and NCRS Regional Top Flight honors in 2004, a result of the careful restoration by the Naber Brothers of Houston, Texas, that encompassed NOS parts including five Firestone tires. It was then invited to the 2008 Bloomington Gold L88 Invasion and 2018 L88 Explosion Special Collections, further adding to its accolades. Documented with the aforementioned letter from Wigder Chevrolet, this top-tier collector Corvette L88 comes complete with judging sheets and certificates, restoration receipts and owner’s manual. Furthermore, the original L88 engine has been affirmed by Al Grenning’s Classic Car Affirmation Services.

Even among the hallowed ranks of its peers, this 1969 Chevrolet Corvette L88 is a special automotive treasure. Its first owner was renowned L88 racer Tony DeLorenzo, who enjoyed success in SCCA racing in a 1967 L88 and later shared 22 consecutive wins in a pair of Owens-Corning Fiberglas-sponsored L88s with his racing partner Jerry Thompson. In the midst of becoming one half of the most successful Corvette racing team in history, DeLorenzo special-ordered this triple-black L88 convertible from his racing sponsor, Hanley Dawson Chevrolet, to use as a daily driver.

The car is one of only two 1969 L88 convertibles finished in this sinister-looking combination, which perfectly suits its subject. There is more than one reason so few L88 Corvettes made it to the street, the main one being that it was simply impractical as a road car: heater and radio delete; no power accessories or air conditioning allowed; no fan shroud, meaning a tendency (actually practically a guarantee) to overheat in traffic; and the necessity for aviation-grade gasoline. The L88 was in fact a race car disguised as a production car, because that was the only way Corvette Chief Engineer Zora Arkus-Duntov could work around GM’s corporate ban on factory involvement in racing. Another factor was the cost. The L88 option package added a whopping $1,032.15 to the Corvette convertible’s $4,438 price tag, almost $600 more than the L71 option that was rated 5 HP higher than the L88’s absurdly misleading 430 HP rating.

Of course, none of these factors was a deterrent to DeLorenzo, who not only drove his L88 daily but also dressed it up to match his Owens-Corning-sponsored racer, adding chromed Kustom exhaust headers and side pipes, FIA-spec Plexiglas-covered headlight assemblies, fender flares and a urethane bumper. In December 1969, DeLorenzo sold the car to his friend Curt Wetzel, a German pilot who flew for Pan Am Airlines. Wetzel raced the car throughout Europe and proved virtually unbeatable. The car so frustrated its opponents that a Porsche racing team actually bought the car to remove it from competition. Nonetheless, the car later returned to the track under the ownership of Hans Hirt of Switzerland. Hirt owned the car for 12 years before selling it to Joe DeMesy of Dallas, Texas, who delivered it to the Naber Brothers of Houston in 2004 for a frame-off restoration.

Since being returned to its factory-original state, the restored L88 has collected numerous awards. In 2005, it earned a place in the Bloomington Gold “Great Stories” Special Collection where DeLorenzo was reunited with the car after 36 years; later that year, the car earned NCRS Top Flight honors. It followed that up with Bloomington Gold certification, Chevy Vettefest Gold Spinner and Triple Crown laurels in 2006, and in 2007, the car was inducted into the Bloomington Gold Hall of Fame. In 2008 and 2018, the car was displayed at Bloomington Gold for the L88 Invasion and L88 Explosion Special Collections. This very special L88 convertible was also featured in the L88 Showcase at the Muscle Car and Corvette Nationals held in November 2009 in Chicago, Illinois.

Easily identified by its European license plate signed by DeLorenzo, this L88 convertible is documented with correspondence between DeLorenzo and Hirt from 1994, a copy of the original window sticker sent from DeLorenzo to Hirt in 1994, a notarized affidavit from DeLorenzo confirming his ownership of the car when new, vintage racing photos, FIA Homologation paperwork, NCRS Shipping Data Report showing delivery to DeLorenzo’s race sponsor Hanley Dawson Chevrolet and vintage magazine articles.

For more details and photos, visit the Mecum Auction Listing.

Bob McDorman Museum Now Closed and Corvettes to be Auctioned

The Art That is The All New 2020 C8 Corvette Interior