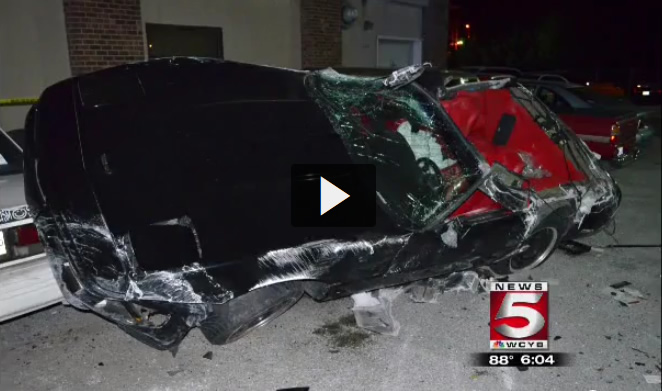 Bristol, Tennessee Man Launches a 1995 Corvette Through the Air Crushing Seven Cars Before Coming to a Halt

BRISTOL, Tenn.— A little after 1:00 a.m. on Sunday morning, Robert W. Akers, 43, lost control of his 1995 Corvette on Shelby Street and appeared to go airborne, hit the ground, landed on top of five vehicles and continued to travelacross a parking lot, where it came to rest on top of two other cars, police said earlier.

The crash was reported by a local police officer who was sitting at the corner of MLK Boulevard and State Street, when he observed the 1995 Corvette traveling at a high rate of speed.

“An officer was watching the Bristol sign and observed the Corvette come over the railroad tracks at a high rate of speed where it looked like it jumped the tracks, ran over the median on MLK and drove the wrong way down the street,” said Lt. Tim Sexton, with the local Police Department. “The Corvette then turned left on Cumberland and then left at Lee Street. It didn’t turn left or right but went straight through to Shelby Street, hit a transformer, several cars and ejected a passenger, ultimately pinning the driver in the car. It’s a miracle nobody else got hurt.”

The passenger in the vehicle, 26-year-old Rebecca E. Fields, was thrown about 50 feet from the crash, the report states. She was taken to Bristol Regional Medical Center and has since been discharged, according to a hospital spokesman.

According to the police report, speed and alcohol are believed to have been involved in the crash.

Akers has been charged with reckless endangerment, serious injury and use of a deadly weapon, speeding and running a stop sign.