The evolution of the Beach Bums Corvette Club of New Jersey started in the late 1990’s with an informal group of guys getting together to cruise to Corvette shows and doing parades.  Friendships developed around the common interest, The Corvette.  Among the more active members of this group were Donna and Jim Lewis, and they initiated the idea of formalizing the group in a Corvette enthusiasts club.

The partying culture of the club and the sea shore location resulted in the naming of the club: Beach Bums Corvette Club.  Donna Lewis was the first President and did most of the hard work of forming the club.

Initially very socially orientated, the club had meetings at member’s homes and pool parties.  Then Howard Welch set up meetings at Gardner Chevrolet and the club grew to over 20 members.  At this point Howard felt the club was ready to have an all Corvette judged show at Gardner.  It was a big success with about 55 Corvettes registered. Gardner shows continued with proceeds going to local charities, unfortunately show burn out occurred and the Gardner show was discontinued.

The club meetings where then moved from Gardner to Barnegat Rec. Center.  After a year off from shows, Ralph Gessner and Jamie Ciardelli suggested we do a show at Bay Village Beach Haven.

The Bay Village venue was a big hit with car counts exceeding 150 Corvettes. The club really pulls together for these shows and of course the guests appreciate the BBCC hospitality.  Due to the show success we have been able include many charitable organizations.

The club is having fun participating in Memorial Day Parades, Corvette rally’s, Fall Cruise and lunch, Miniature Golf Tournament, cruises to Pt. Pleasant, detailing clinics at Dependable, judging clinics and many cruises to car shows with many proud trophy winners.  And of course, our yearly Christmas Party at nearby restaurants.

We have come a long way and relationships have grown.  Interest in the Corvette is being shared with others and we have given back to the community in  many ways. 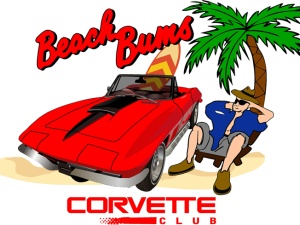